This article is using {{Card template}}.
See Help:Style guide/Card for how to edit this kind of article.
Edit this article
Chameleos
46706 • GIL_142
Regular 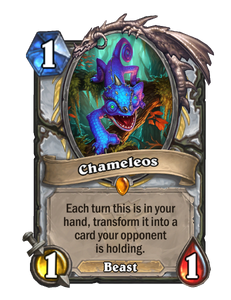 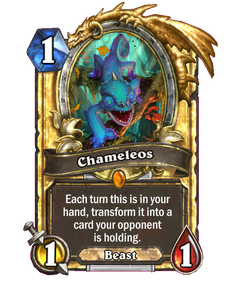 Dimensions: Full • 330 x 410px
Elite
Each turn this is in your hand, transform it into a card your opponent is holding.
Flavor text

He's everyone you want to be. 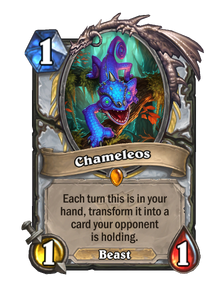 Chameleos is a legendary priest minion card, from the The Witchwood set.

Chameleos can allow you to see your opponent's hand, card by card. In a long game, this can mean few to no surprises, and an awful surprise for your opponent.

While this can allow you to avoid playing into a big board clear or high-health Taunt minion, opting to hold onto Chameleos for an extended period can result in him becoming a dead card in your hand.

However, Chameleos can often time snatch the priest the game especially in control match ups where it could out value the opponent. Pulling off a Warrior's Sulfuras or a Paladin's Galvadon could be a deadly swing in favor of the Priest.

Beware that certain cards like Hecklebot (or Deathlord in Wild), could bring Chameleos out of the deck, rendering it useless. In Aggro match ups, drawing Chameleos is a dead draw, and praying for a board clear in your opponent's hand is oft in vain, since Aggro decks rarely, if ever, run AoE's.

While there are a handful of scattered references to chameleons in the Warcraft universe, such as Aspect of the Chameleon and Glyph of the Feral Chameleon, Chameleos itself is unique to Hearthstone.