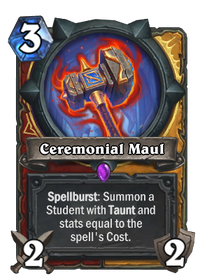 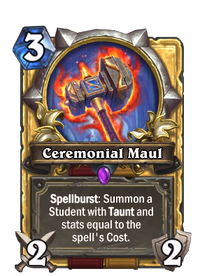 Spellburst: Summon a Student with Taunt and stats equal to the spell's Cost.
Flavor text

For the most discerning of hall monitors.

Ceremonial Maul is an epic warrior/paladin weapon card, from the Scholomance Academy set. 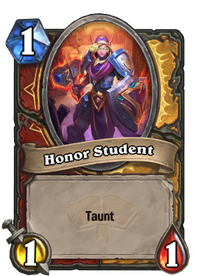 A really good weapon for early trades or late game defensive measure, Ceremonial Maul is a versatile weapon for any deck type. The only downside is the cost/effect. Low cost spells will just create average cards for one trade, or just for a little holdback.

Despite the early game downside, this weapon has a great synergy with High Abbess Alura. A combo Spellburst will can ensure some good transitions to early-midgame. Her Spellburst is not limited to spell cost, this will reduce the possible side effect from having a weaker Honor Student.

Multiple Mauls can exaust your opponent's resources. Hoard Pillager is a nice example, allowing another Spellburst and damage addition. Rummaging Kobold works similar to Hoard Pillager, but the weapon will return to your hand.

This weapon should be used along other minions or combining with a high cost spell like Lay on Hands. The later one gives some nice comeback chances, specially if you have a Zandalari Templar or Blackguard.

Damaging spells works very good with its Spellburst. For a late game strategy, Timepiece of Horror should do the work. The 10 damage spread can bypass Taunts and at the end, you should get a 10/10 Taunt Honor Student and two attacks for 2 damage each. If paired with Spirit of the Tiger, you can get a really strong board presence. But, remember that, Spellbursts works only once.

When equiped with a unused Spellburst, most of the time, you will save the effect for a stronger spell cost, so, try to avoid any low cost spells, specially if you have a Coin, Forbidden Healing and other zero cost spells, your Spellburst will go to waste if you don't pay attention. However, Ceremonial Maul can be used to counter increasing spell costs effects. So, you can pair Prismatic Lens with Ceremonial Maul to negate the downside of increased spell cost. Along with spell costs, you can counter Secrets tied to minion summoning. Except from Sacred Trial, Spellburst summonings will ignore all other Secrets that applies to summoning. And along with it, you can counter Counterspell, because the Spellburst will not trigger when the spell is voided, so, baiting a Counterspell with a low cost spell works really good, and after that, you can cast a high cost spell like A New Challenger... for a double taunt strong minion.