This article is using {{Card template}}.
See Help:Style guide/Card for how to edit this kind of article.
Edit this article
Cenarius
36 • EX1_573
Regular 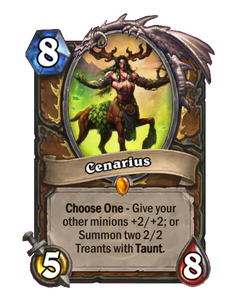 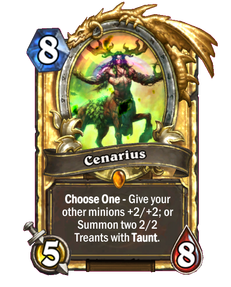 Yes, he's a demigod. No, he doesn't need to wear a shirt. 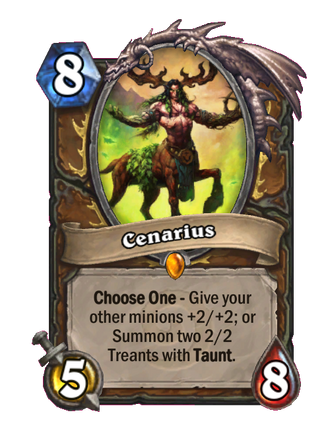 For other appearances of Cenarius, see Cenarius (disambiguation).

Cenarius is a legendary druid minion card, inducted into the Legacy set, formerly from the Classic set. 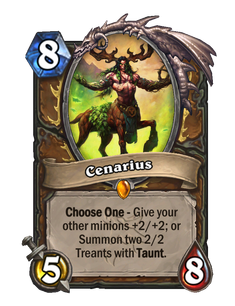 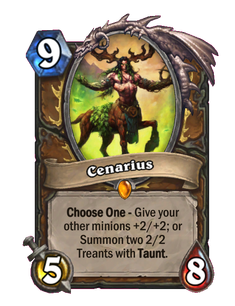 Cenarius is obtained for raising druid to level 10.

Golden Cenarius (Core) is obtained for winning 500 games as druid.

Cenarius (Core) is uncraftable and cannot be crafted or disenchanted. 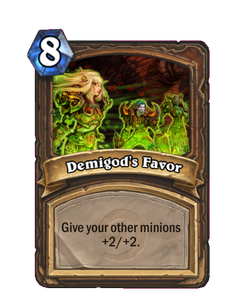 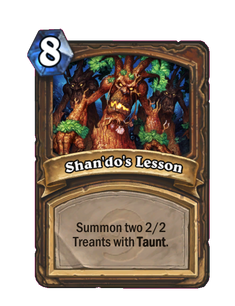 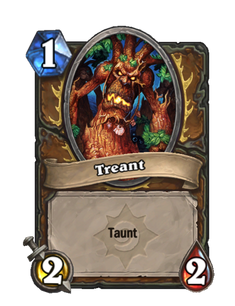 Cenarius is a well-rounded late-game legendary. If you already have a few minions up on board, giving all your minions +2/+2 results in a significant increase in burst damage. He is also very adaptable because if you have no other minions, you can choose to summon two 2/2 Treants instead, providing a decent amount of stats on board and some protection against other minions and weapon attacks. This play will leave you susceptible to AoE removal, however, since 2 damage is rather easy to achieve, and Cenarius himself has rather unremarkable stats.

Ossirian Tear - he becomes significantly more powerful. Two 4/4s are much harder to get through than 2/2s, making Cenarius much better as a defensive play, and your other minions get the buff regardless. The two Treants he summons can also be used for Treant synergy effects like

Cenarius, Lord of the Forest and patron god of all druids, is one of the most powerful and influential demigods of Azeroth.

As the son of Elune, goddess of the moon, and the demigod Malorne, Cenarius inherited a deep connection to the world of Azeroth and its creatures. When Cenarius' birth sent a ripple through the Emerald Dream,

Ysera took an immediate interest in him. Guiding him into the Dream, she taught him much of its secrets and became a foster mother of sorts to him. Cenarius grew to love the lush forests of Ysera's verdant realm. He could often be found treading its infinite dreamways, either watching over Azeroth and its creatures, or simply hoping for all that they might yet become.

The demigod grew into a powerful and cunning being, the union of the heavens and the earth. He has many powers over nature, which he inherited from his father Malorne. His daughters are known as the fey dryads and his sons as the wise Keepers of the Grove, or simply "keepers", including Keeper Remulos, Ordanus, and Zaetar.