This article is using {{Card template}}.
See Help:Style guide/Card for how to edit this kind of article.
Edit this article
Celestial Dreamer
40404 • CFM_617
Regular 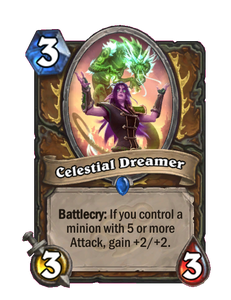 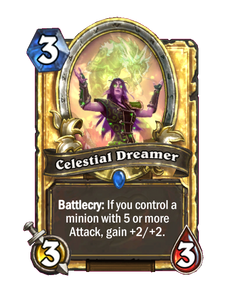 If you think her job is easy, YOU try falling asleep on cue. 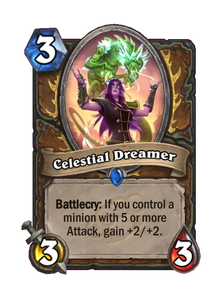 Celestial Dreamer is a rare druid minion card, from the Mean Streets of Gadgetzan set.

This minion is only effective when the Battlecry condition is met. This means that you should only play it:

The lore behind this card is uncertain. The card art depicts a night elf dressed in a monk's typical attire in front of a glowing green cloud serpent extremely similar to Yu'lon, the Jade Serpent, one of the four August Celestials that watch over the continent of Pandaria. The August Celestials are considered Wild Gods, the same type of immortal, animalistic demigods as the loa gods worshipped by the trolls and Ancient Guardians such as Cenarius, Malorne and Aviana. Just as the loa are worshipped by the trolls and the Ancients are revered by druids, the Celestials are worshipped and honored by the pandaren, particularly monks.

The name "Celestial Dreamer" combined with the summoning quote and the enchantment name "Visions of Hypnos" appear to indicate that this night elf seeks to empower herself and take on the aspects of Yu'lon by conjuring up a dream or vision of the Wild God.