This article is using {{Card template}}.
See Help:Style guide/Card for how to edit this kind of article.
Edit this article
Catrina Muerte
52627 • DAL_721
Regular 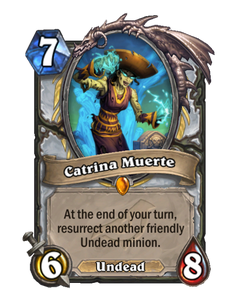 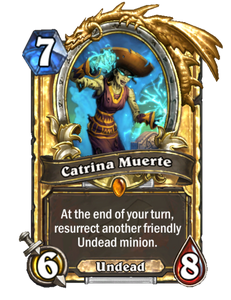 Dimensions: Full • 330 x 410px
Elite
At the end of your turn, summon a friendly minion that died this game.
Flavor text

She always manages to lift your spirits. 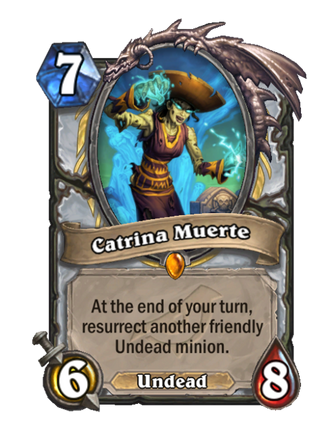 Catrina Muerte is a legendary priest minion card, from the Rise of Shadows set.

Catrina Muerte is best used in a deck with few, powerful minions. That way, Catrina is as likely as possible to revive a powerful minion rather than a weak one. Do whatever you can to keep her alive as long as possible, as the longer she's able to keep reviving minions, the more trouble she'll spell for your opponent.

Catrina is one of the NPCs involved with the Day of the Dead world event, appearing alongside Chapman at all capital city graveyards. She will transform all who /dance with her and award the achievement Dead Man's Party.