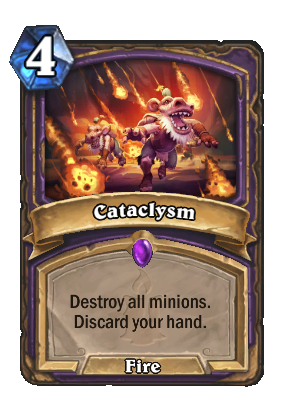 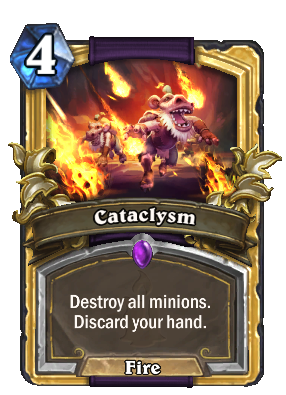 Cataclysm is an epic warlock spell card, from the Kobolds and Catacombs set.

Cataclysm can be obtained through Kobolds & Catacombs card packs, or through crafting.

While this card is extremely cheap for a board clear, discarding your entire hand means in most cases you won't have anything to follow up with, unlike Deathwing which leaves you with a 12/12 and turns the board in your favor. Using this card means you will need to top-deck something worthwhile right afterwards, although this is made easier by Life Tap. Having or playing with a Deathrattle minion like Loot Hoarder can make up for these losses.

On the other hand, if you have Malchezaar's Imp, it'll negate this downside by redrawing your hand.

On the plus side, this card is a very strong enabler for Discardlock decks. Discarding your entire hand means you are guaranteed to summon a Silverware Golem or buff Clutchmother Zavas, and most importantly, it can be used complete the Lakkari Sacrifice quest extremely quickly and lets you play Nether Portal on curve.

Cataclysm was originally a passive ability for Destruction warlocks that increased the Fire damage dealt by all of their abilities. It was removed in the Mists of Pandaria expansion, but in Warlords of Draenor it made a return as an active talent which, after a 2.5 second delay, conjures a cataclysm at a target location, dealing heavy Shadowflame damage to all nearby enemies and afflicting them with Immolate.

The spell appears to have thematical ties to Deathwing, who in the World of Warcraft expansion of the same name caused a worldwide disaster known as the Cataclysm, which caused great destruction across much of Azeroth.