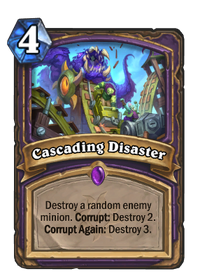 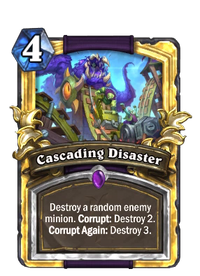 Please keep all hands, arms, feet and legs inside the ride until the monster comes to a complete stop.

Cascading Disaster is an epic warlock spell card, from the Madness at the Darkmoon Faire set. 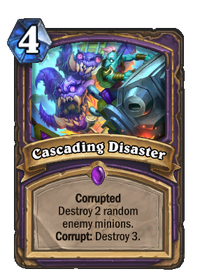 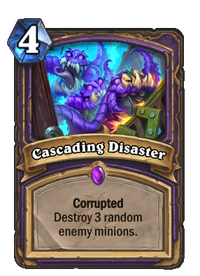 On its own, overpaying for a Deadly Shot is okay in Warlock. Once Corrupted however, Cascading Disaster becomes a highly efficient board clear, comparable to a half-cost Twisting Nether that doesn't hit your own board. You will need plenty of 5 cost or more cards to make Cascading Disaster worthwhile.

Don't be afraid to waste some of Cascading Disaster's value if you need the board cleared. Especially because each Corrupted one you cast will be put back into Y'Shaarj, the Defiler's pool of cards, allowing for major board swings on the turn it's played.

You can remove the RNG of this card by playing it only when the opponent has the number of minions the current stage is at or less, using it to clear the board entirely.

There are 3 achievements related to Cascading Disaster.