This article is using {{Card template}}.
See Help:Style guide/Card for how to edit this kind of article.
Edit this article
Carousel Gryphon
53802 • DALA_BOSS_34h
Regular 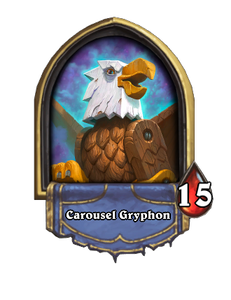 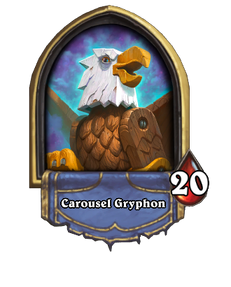 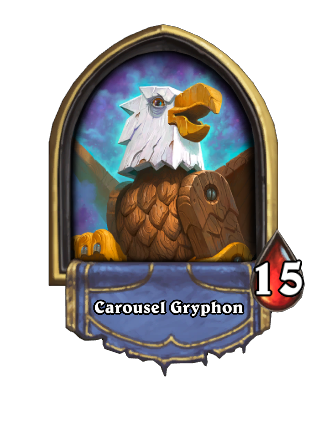 For the collectible card in Madness at the Darkmoon Faire set, see

Carousel Gryphon is a boss that can be encountered in The Dalaran Heist adventure.

It is probably advantageous (unless you have a minion with an instantaneous ability, like Charge or a Battlecry) to avoid playing any minions until Carousel does first: otherwise it will probably avoid playing a minion, and get your minion without giving one up in return.

If Gryphon plays his best minions on his left (right from player's perspective) to delay their rotation, attacking the to-be-rotated weaker cards on his right (player's left) can clear a path to gain control of the stronger minion. The player should take a similar strategy: when playing cards out of hand, generally play the strongest cards to the left of the weaker cards.

Reinforce as that automatically appears rightmost. This also happens with minions (like

It can often be best to just attack Face with your strong minions to get as much use as possible out of them before they are lost. If you are winning the Gryphon will be forced to attack your strong minions instead of you anyway, but then he's trading on his own time.

If you have any direct damage (spells, weapons, hero power) try to implement this to the maximum. It rids you from playing the minions which will be on the enemy board later. That could be saved for when you have built up a higher capacity of weak minions to be given away. The tries not to play big minions if he can't place them on his right (player's left) of his weaker minion.

Madame Lazul
De carousel from de Darkmoon Faire is in town. It is a thing of evil, so be gentle with it.

Kriziki
This form of amusement sickens me.

Captain Eudora
I want a refund.