This article is using {{Card template}}.
See Help:Style guide/Card for how to edit this kind of article.
Edit this article
Carnivorous Cube
45195 • LOOT_161
Regular 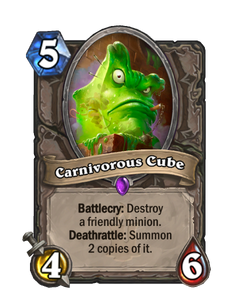 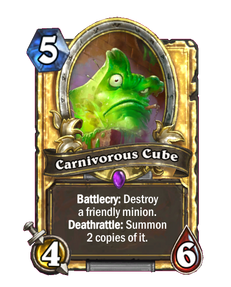 He's always grumpy until he's eaten his first barista of the morning. 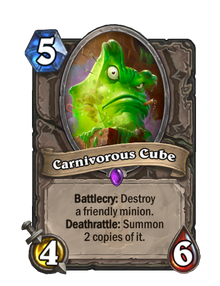 Carnivorous Cube is an epic neutral minion card, from the Kobolds & Catacombs set.

Carnivorous Cube gives the player an additional copy of the destroyed minion, but this comes with the cost of initially weakening your board and the value being delayed. While duplicating a large minion like The Lich King is a good option if you can afford being behind on the board, a less costly alternative is to target a minion with with a powerful Deathrattle, giving you two more uses of its Deathrattle and allowing N'Zoth, the Corruptor to potentially summon more copies of the destroyed minion.

While its stats aren't too terrible, cards that can kill it off or activate its Deathrattle instantly, like Dark Pact and Play Dead, will give you immediate returns. If comboed with Spiritsinger Umbra, it summons two copies of the minion immediately, as well as two more after the Cube is destroyed, which greatly multiplies the minion's value.

Carnivorous Cube can also be used on Charge minions, which is more effective if you can reliably kill it off quickly. Doomguard is very effective with this combo, which can be brought out for free with Possessed Lackey or Skull of the Man'ari. This can furthermore be combined with Spiritsinger Umbra to gain the two copies of Doomguard immediately, after which the Cube can be killed off with Dark Pact or Sanguine Reveler to create two more, dealing up to 25 damage for 10 mana.

Oozes are plentiful in the Warcraft universe, but slimes that specifically exhibit a cube shape are unique to Hearthstone.