The subject of this article is part of Fractured in Alterac Valley, an upcoming expansion planned for release on December 7, 2021.
Caria Felsoul
68061 • UPCOMING_68061
Regular 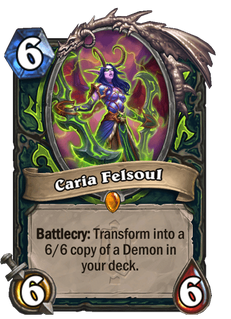 This is what happens when you keep taking the advice of the little demon on your shoulder.

Caria Felsoul is a legendary demon hunter minion card, from the Fractured in Alterac Valley set.

Caria Felsoul can be obtained by:

Caria Felsoul was a night elf demon hunter and one of Illidan's most cunning pupils. Though held in regard as one of the most cunning and adept demon hunters of the Illidari Caria would ultimately turn against them by joining the Burning Legion, enticed by their promises of power. Impressed by her skill, Kil'jaeden granted her the famous Aldrachi Warblades. During the Battle for the Broken Shore, Caria was summoned by Gul'dan to the Tomb of Sargeras.