Difference between revisions of "Card pack" 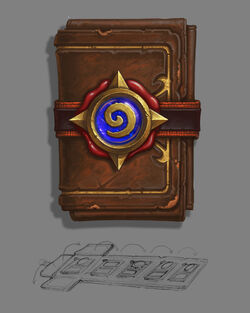 Card packs are items that players can open to acquire cards for filling a player's collection.

Every expansion has its own type of card pack with unique artwork, and each card pack contains 5 cards from that card set. Each card opened has a chance to be of common, rare, epic or legendary rarity, but each pack is guaranteed to contain at least one card of at least rare rarity.[1] Each card opened also has the chance to be a golden version of that card. The chances for rarities and golden versions are the same for all types of card packs,[2][3][4][5] and is well-documented in the statistics section below.

Card packs are the most cost-efficient means of obtaining cards. They offer the quickest way of expanding the player's collection for a particular set, but when wishing to obtain a specific card, players will generally find it cheaper and quicker to craft the card instead.

As of Patch 16.0 (Descent of Dragons patch), all card packs, Standard and Wild, are available for purchase in the in-game Shop. However, only Standard card packs are awarded from in-game rewards, such as Ranked rewards and Arena rewards. 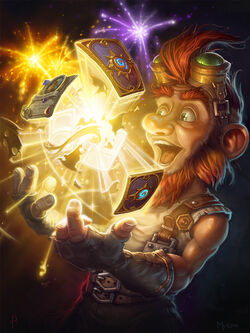 Card packs can be opened by clicking on the "Open Packs" icon from the main menu screen. The number underneath the icon indicates how many unopened card packs you currently possess.

Once the Open Packs screen has been reached, all current unopened packs will be displayed on the left-hand side. Drag a pack over to the right-hand section or hit the space bar to open it. Once you open a pack, 5 cards appear face down. This forces you to turn each card individually either by hitting the space bar or clicking each card.

Hovering over a card shows a border depending on the rarity of the card. Hearthstone uses quality colors based on World of Warcraft's gear system.

The following purchasing options are available. Only the single pack option is available for gold (although players can buy more than one pack at a time); all other options require real money. Players can use any of the payment methods that are also available for buying games and goodies from the Blizzard store.

Some of these prices were subject to changes on March 22, 2017 and may no longer be accurate.[6]

* Russian Ruble prices are frequently changing due to unstable exchange rate.
** Only available on PC and Mac.

Note that a discount is offered when buying in bulk. Purchasing 40 packs of cards at once presents a 12-16% discount compared to buying cards in sets of 2. Exact prices and discounts vary by currency.

While no bulk purchase option is presented for gold transactions, players can double-click on the '1 pack' option to instantly order multiple packs by entering a number from 1 to 50. No discount is offered. Players are informed of this option upon entering the shop for the first time with a sufficiently large amount of gold.[7] 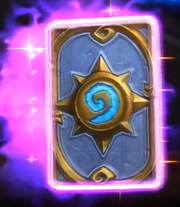 Hovering over an Epic card.

Various attempts have been made to establish the chances of receiving each rarity of card when opening card packs. Note that all types of card pack have the same chances at rarities and golden cards.[2][3]

The following numbers combine data from several other studies. Since the numbers provided by each study are relatively similar, this is mostly for the convenience of a single overview of the statistics, as well as improved accuracy in the rarer cases. The original studies can be found in the linked article.

In April 2017, in compliance with Chinese law, Blizzard published official probablities of card drops.[8] Though the official announcement applies to the Chinese region only, it is likely that the drop rates are across all regions.

The officially announced drop rates are:

The reported drop chances are slightly lower than the observed drop rates. This is likely an indication that the announcement drop rates have to be read as "at least 1 epic every 5 packs", and "at least 1 legendary every 20 packs".

Golden card data gathered prior to The Grand Tournament show significant differences from that gathered after. For this reason the below information is currently taken solely from the most recent study: HearthSim (August 2015).

The following table describes the likelihood of getting at least 1 golden card in a given pack.

The following table describes the percentage of cards of each rarity which will be golden.

On June 22nd, 2017, Blizzard announced the brand new rule of duplicate protection would be implemented for legendary cards opened from card packs.[9] The announced duplicate protection rule and some additional rule changes to pack opening were officially implemented on August 10th 2017 with the launch of the Knights of the Frozen Throne expansion and were as follows: 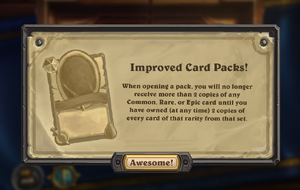 Purchasing options in the Americas region.

There are many strategies to opening card packs to maximize their utility, depending on factors such as how much gold a player earns on average per day, if the player is new, etc.

The Goblins vs Gnomes card pack and its opening animation was originally designed by Jomaro Kindred,[25] and animated by John Zwicker.[26]