Difference between revisions of "Card back" 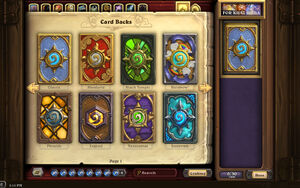 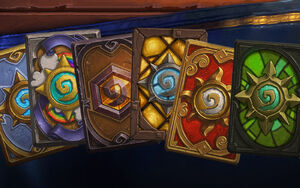 Some of the game's card backs

Card backs are a feature which allows players to replace the standard design on the reverse of their cards with alternate designs.

Players can select which card back to display through the Card Backs pane of the Collection, with the selected design displayed in-game, visible to both the player and their opponent. Numerous different card backs are available to collect, with each offering a distinct animated design.

Players can earn alternate card backs through fulfilling various criteria, such as participating in a season of Ranked play, or completing certain quests. Ranked participation card backs are rewarded for winning 5 games in that season, awarded at the end of the season (for more information, see here).

Prior to 2020, almost all card backs from Ranked rewards could not be obtained again once they were rewarded to players. However, starting in 2020, otherwise unobtainable card backs started to be re-released in the Shop for everyone to purchase for 500 gold each. The first card back to be re-released was the "Naxxramas" card back, being shown for sale in the Shop in July 2020.

Card backs are purely decorative and do not affect gameplay in any way.[1]

In order to be used, card backs must first be acquired. Some card backs are available for players to acquire on an ongoing basis, while others are only available for a limited period. Once acquired, all card backs can be used regardless of current availability.

Each card back has its own flavor text when viewed in the Collection; this is stated below the card back's requirements.

Click on any design to view a larger image.