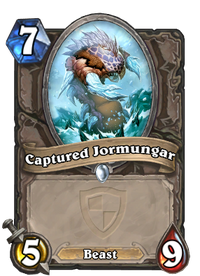 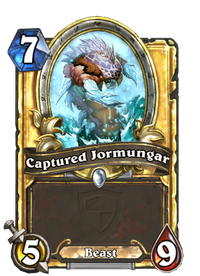 You can keep him, but you have to promise to feed him and clean out his tank every day!

Captured Jormungar is an common neutral minion card, from the Grand Tournament set.

Captured Jormungar can be obtained through The Grand Tournament card packs, or through crafting.

A Core Hound with its stats reversed may prove to be much more useful. The high Health may allow it to trade for 3 smaller minions, while still being able to take care of a bigger opponent e.g. a Chillwind Yeti. A good target for various buffs e.g. Mark of the Wild and healing.