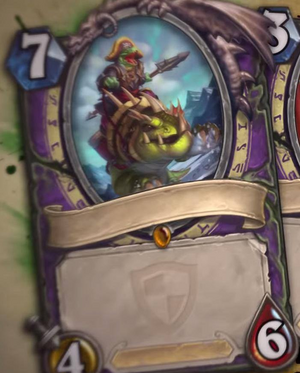 The unnamed The Grand Tournament minion briefly seen at the beginning of the expansion trailer.

Captain Scaleblade[1] was a minion card originally planned to appear in The Grand Tournament, but which was cut prior to release.

Prior to the card's removal, The Grand Tournament featured two legendary Pirate minions: Captain Scaleblade and Skycap'n Kragg. Skycap'n Kragg was originally planned to be a 1/1 Charge minion that would be summoned from the player's deck when they played a Pirate. However, due to unforeseen synergies with One-Eyed Cheat and Ship's Cannon, the original design for Kragg was cut,[2][3] but as Kragg's art was prominently featured in the expansion's trailer, the art and names of Kragg and Scaleblade were swapped, with the former becoming a 4/6 Charge minion while both the character of Scaleblade and the design of a 1/1 Charge minion were left out of the set.[4] The original design for Skycap'n Kragg would eventually be released 16 months later in the Mean Streets of Gadgetzan expansion as Patches the Pirate.[5]

Despite Scaleblade's removal, his art and original cost and stats can still be briefly seen at the beginning of the expansion's trailer alongside Master of Ceremonies, Injured Kvaldir, Brave Archer and Wilfred Fizzlebang. It appears to depict a saurok riding a mushan beast and is reminiscent of Salyis's Warband, a world boss from Mists of Pandaria. The original card may thus have represented a saurok champion from Pandaria.