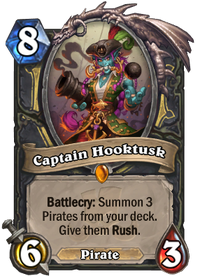 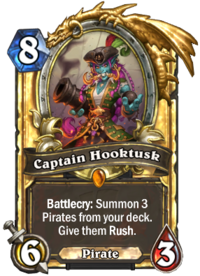 Battlecry: Summon 3 Pirates from your deck. Give them Rush.
Flavor text

"You three! Get in the cannon!"

For the boss of the same name, see Captain Hooktusk (boss).

Captain Hooktusk is a legendary rogue minion card, from the Rastakhan's Rumble set.

Captain Hooktusk can be obtained through Rastakhan's Rumble card packs, or through crafting.

Captain Hooktusk is able to generate immediate board presence and break through a player's last line of defenses. For maximum value it's best to use this minion when your opponent has some minions remaining in order to make use of the rush bonus. This card has great synergy with Ticket Scalper as it will all but guarantee a two card draw and kill an opposing minion. It can be a good idea to pair Captain Hooktusk with Spirit of The Shark to fill the board, but note you can only summon five minions with Hooktusk's double Battlecry.

Hooktusk herself while having an impactful Battlecry, lacks the stats to be worth using in a deck with low synergy. It's best to not use battlecry reliant Pirates with her as they will not activate their Battlecry on summon, using Pirates with Deathrattle or Overkill are much more favorable due to the ability to immediately run them into foes and pull off their bonus effects.

Hooktusk is unique to Hearthstone. An elusive troll pirate and notorious cheater,[1] she serves as the champion of Gral's Sharks, the swashbuckling rogue team in Rastakhan's Rumble.

This charming and flashy pirate has come ashore to claim her share of glory in the Rumble, and she’ll lie, cheat, and steal to get it! Rogues who choose Captain Hooktusk as their champion will find that she rarely goes anywhere without her loyal crew.[2]

Gral was not a subtle Loa. When he wanted something, he went for it, full force. He was a natural match for Captain Hooktusk and the bloodthirsty band of buccaneers she called a Rumble team. When it came to the Sharks, ruthless was a euphemism. They never played by the rules. Sometimes they’d even make up rules just for the pleasure of breaking them. Just before they broke their opponents.[3]