"The Captain left treasure for EVERYONE, but mostly for you! Each turn, open a chest of three random cards and choose one to put in your hand!"

Captain Blackheart's Treasure is a Tavern Brawl. It debuted on November 18, 2015. For exact times, see the schedule.

This Brawl was originally planned for release as the 20th Tavern Brawl on October 28, 2015, debuting the Discover mechanic ahead of the launch of The League of Explorers, but technical difficulties caused it to be replaced after a short interval by a reprise of Spiders, Spiders, EVERYWHERE!.[1][2]

On the fifth reprise (October 30th, 2019), weapons were added to the brawl and it used Standard format only.

This Brawl sees players doing battle using classes of their choosing. However, regardless of class, both players' decks consist of 30 copies of Pirate.

While the mulligan functions normally, at the start of each turn, instead of drawing a card from their deck, the player Discovers a new card. This provides the player with a choice of three random cards, with their chosen option added to their hand. The three choices offered do not function like regular Discover effects. The first choice (on the left) is always a spell from the player's class, and the remaining two choices are either minions or weapons which may be neutral or from the player's class.

The order of the three Discover options for the opponent are randomly displayed, so it is not possible to deduce if the opponent chose a spell or minion based on which card they picked. 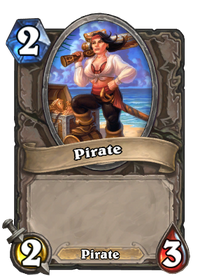 With each deck consisting solely of 30 x Pirate, the mulligan serves no purpose in this Brawl, and should be skipped immediately.

You have to make the most use of the one that you choose from the three cards; it is useful to pretend it is like the Arena, except you can instantly play the card. It is usually preferable to choose an excellent card for next turn rather than a bad play this turn, although arguably there could be a minor tempo loss it sets up for a better play next turn. Choosing cards based on synergies with other cards or card types you don't yet have is a risky strategy, and it's usually best to pick cards which have value in themselves, or in combination with others already in your hand.

As the classes with the best Pirate-synergy, this Brawl's predominance of Pirates offers a slight advantage to the rogue and warrior classes. For rogues, Shady Dealer offers excellent stats for its cost, while One-Eyed Cheat can provide good face damage or desirable trades. For warriors, Bloodsail Cultist has good stats with a free Upgrade!, although you will need to find and equip a weapon beforehand. In both cases the minion can be triggered through playing the Pirates provided at the start of the deck and by all subsequent card draw.

The value of card draw is obviously strongly altered by this Brawl. It can be an effective way of obtaining cheap minions, or Pirates for related synergies, but in general its value is heavily reduced.

Spell Damage effects are valued slightly higher because of the guarantee that a spell is always offered at the start of every turn.

With each player's deck consisting of identical Pirate minions, within this Brawl Joust effects are guaranteed to fail. The only exception is when a shuffle into deck effect has placed a different card into the player's deck, although even then this is very unlikely to be the card drawn in the Joust. Because of this, most Joust minions are relatively poor choices, since their special effects are almost certain not to trigger.

Captain Blackheart is likely based on one of two characters.

Burgy Blackheart is a ghostly gnome pirate captain seen in World of Warcraft. Going by the title <Dreaded Captain of Diane's Fancy>, Burgy is first encountered in the Shimmering Expanse, where he drops the sought after Burgy Blackheart's Handsome Hat. He is later recruited by Alliance adventurers to serve in their garrison, albeit lacking his hat.

Seriously. Feast away. I'm quite beautiful.

The ghost pirate Blackheart has staked his claim upon the realm of Mistharbor. His raucous undead pirate crew has poured onto the streets, claiming the once thriving marketplace as their new den of vice and villainy.

Blackheart seems to have a love of battle, mayhem and most of all treasure. He regularly summons chests of treasure for players to battle over, and once players have turned in enough coins, he will turn the cannons of his ghostly ship to bear upon the enemy team's fortifications, blasting very solid cannon balls to demolish their towers, forts and even their core. Blackheart's undead crew can be found at various points around the map, and can be defeated to gain a couple of coins, as can the usual assortment of mercenaries.

Notably, one of Blackheart's quotes - "Treasure for everyone! ...but mostly for me." - matches almost exactly the Brawl's introductory text, "The Captain left treasure for EVERYONE, but mostly for you!" While Burgy's presence in the Warcraft universe would seem to make him the stronger candidate, this quote appears to confirm a connection between Captain Blackheart of Heroes of the Storm and this Brawl. If so, this represents the first migration of a Heroes of Storm character to another Blizzard game, and certainly the first such inclusion in Hearthstone.