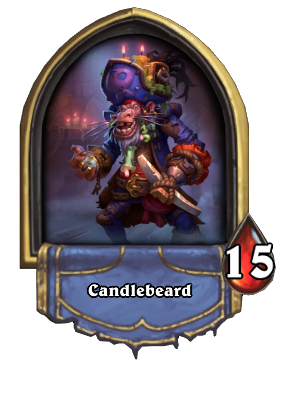 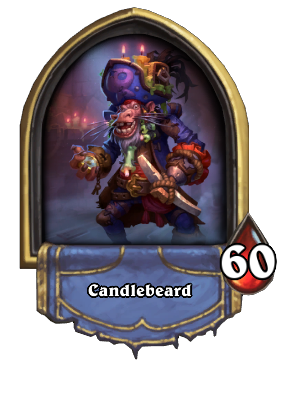 Candlebeard is a boss that can be encountered during the Dungeon Run.

This deck used in both rounds.

Candlebeard
Snicker me whiskers!
Sloop in my throat!
Flick me wicks!
Trigger me diggers!

Hero Power on a big minion

Candlebeard
Yo ho... no...
Keelhauled!
Scuppered!

In his first form, Candlebeard takes the form of an Aggro. Thanks to his hero power, he is able to give his minions Charge for a cheap price. However, this is not a big deal as he can only give one charge every turn. The best way to counter this is to keep his board empty or prepare it for any scenario. Aside from a Vanish, Candlebeard lacks board clear. Thus thinking ahead is always better. In conclusion, control the board, keep up the pressure, destroy any minion that he plays and you should be fine.

Should you encounter him later on, his Aggro deck gets difficult to deal with. Aside from having more health and the same deck, Candlebeard's Hero power gives his minions automatic Charge. This is devastating as Candlebeard will always be one step ahead. The situation is dire but not impossible. The most common counter is to build a board full of taunt minions. However, you are not guaranteed to have them.

The best idea is to keep Candlebeard occupied. This can be done with a mana curve by dropping a minion on the board every turn. All his minions that attack yours will be killed or damaged. Until you get to 7 or higher mana, keep him occupied. You are allowed to take face damage, but keep your health from becoming critical.(under 15 Health) Once you have more mana and more cards, formulate a strategy around the situation. Like Rank 1 fight, gain control of the board should be a priority.

Having Cloak of Invisibility in this fight is disastrous unless you can drop a bunch of huge minions early (like Molten Giants).

Candlebeard is unique to hearthstone. In World of Warcraft, kobold pirates are a rare sight indeed and only one is known named Bilgerat.

Candlebeard appears in Tale of the Fox where he encounters Marin the Fox and tells him about his plot to raid the treasures of Vustrasz the Ancient. Marin disarms him and takes his crew hostage.[1][2]