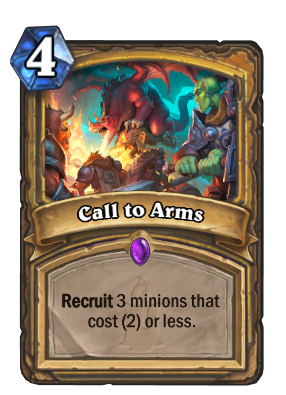 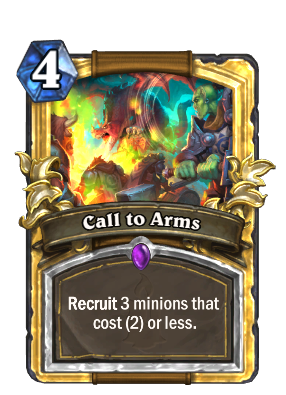 More personal than a text to arms.

Call to Arms is an epic paladin spell card, from the Kobolds and Catacombs set.

Call to Arms can be obtained through Kobolds & Catacombs card packs, or through crafting.

Call to Arms allows you to gain board control early in the game by summoning 3 low-cost minions in the battlefield for 4 mana. It also thins your deck by 3, allowing you to draw better cards. Call to Arms is a key card for Aggro Paladin and Murloc Paladin, letting you swarm the board with high-impact cards like Righteous Protector, Murloc Tidecaller, Knife Juggler, and Argent Squire. While this card is compatible with Baku the Mooneater, the deck-building restrictions causes only 1-drops to get Recruited, which lowers this card's immediate impact but still functions as a deck thinner.

It can also be used by Control Paladin as a unique board clear by pulling Doomsayer, along with cards like Dirty Rat to protect it and Loot Hoarder and Bloodmage Thalnos to refuel.

Since the recruit effect summons a minion direct from your deck, it will void any Battlecry effects.