This article is using {{Card template}}.
See Help:Style guide/Card for how to edit this kind of article.
Edit this article
Cairne Bloodhoof
420 • EX1_110
Regular 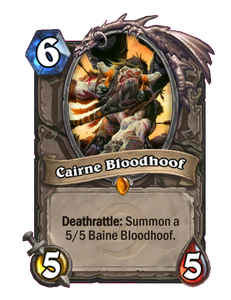 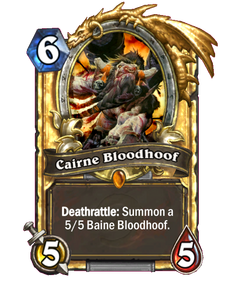 Cairne was killed by Garrosh, so... don't put this guy in a Warrior deck. It's pretty insensitive. 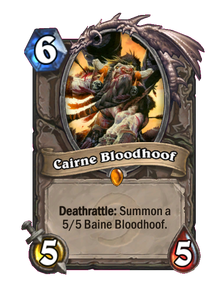 For the boss card in Book of Heroes, see Cairne Bloodhoof.

Cairne Bloodhoof is a legendary neutral minion card, inducted into the Legacy set, formerly from the Classic set. 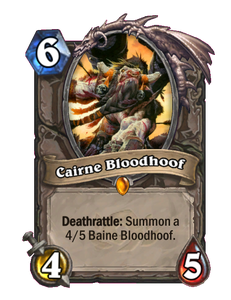 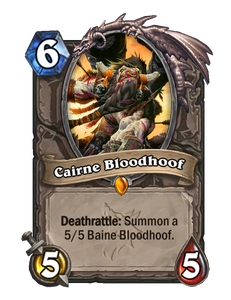 Regular Cairne Bloodhoof is obtained for raising sum of all your class levels to 24.

Golden Cairne Bloodhoof (Core) is obtained for winning 5000 games across all classes. 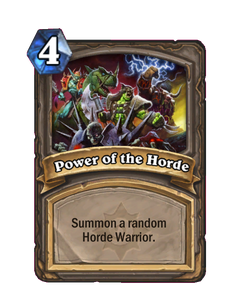 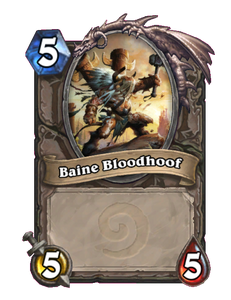 Cairne Bloodhoof is a solid body. Not only is he a 5/5, which is fairly hard to kill in most cases, he also makes another 5/5 - Baine Bloodhoof - when he dies. This essentially means two 5/5 minions for just 6 mana. Cairne is one of the best cards to have in a beatdown-type deck, as well as decks running Barnes or N'Zoth, the Corruptor.

Cairne's main weakness is to effects such as silence, transform and mind control effects, which can negate his Deathrattle or even turn its power to the opponent's advantage. His Deathrattle makes him strong against regular attacks or removal effects.

Cairne Bloodhoof was the Chief of the united tribes of the tauren, chieftain of the Bloodhoof, leader of Thunder Bluff, and the final wielder of the Bloodhoof Runespear. Allying with the Horde upon its arrival on the shores of Kalimdor, Cairne stood as one of its wisest and most venerated leaders, until his unfortunate death in a duel against Garrosh Hellscream, the new Warchief of the Horde. He was succeeded as chief by his son Baine Bloodhoof.