This article is using {{Card template}}.
See Help:Style guide/Card for how to edit this kind of article.
Edit this article
Cabalist's Tome
38418 • OG_090
Regular 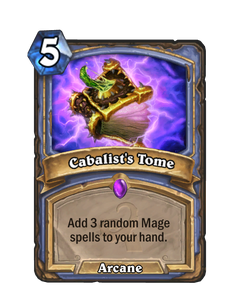 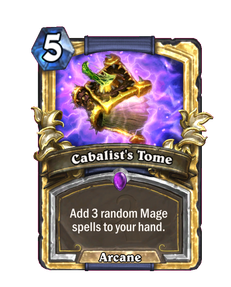 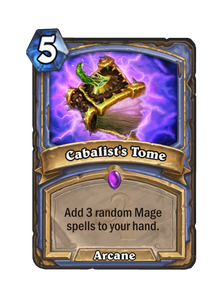 Cabalist's Tome is an epic mage spell card, from the Whispers of the Old Gods set.

A great late-game card when the player has barely any spells left in their deck, or has nearly emptied their hand.

Works well in any spell-synergy deck. Excellent in a deck that contains Yogg-Saron, increasing the amount of spells played that game.

Extremely good in Arena where spells are difficult to obtain.

This card refers to the Twilight's Hammer, also known as the Twilight Cult, fanatical servants of the Old Gods. These appear to be associated particularly with Yogg-Saron.

The most populous of those who count among the Old Gods’ mortal servants—including Yogg-Saron’s followers—are the Twilight Cultists. Some speculate that they got that name because they are working to bring about the twilight of the world. The truth is, it’s just a book club that got really, REALLY, out of hand. Their taste in literature is extremely questionable, but their fan fiction is absolutely packed with, uh, “interesting” passages. Bonus: this book licks your thumb for you when it’s time to flip the page![1]