This article is using {{Card template}}.
See Help:Style guide/Card for how to edit this kind of article.
Edit this article
Cabal Shadow Priest
272 • EX1_091
Regular 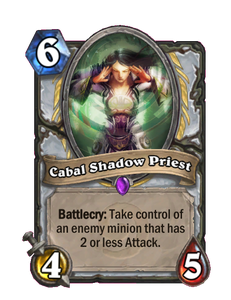 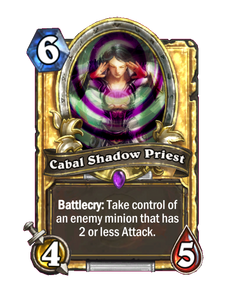 You never know who may be secretly working for the Cabal.... 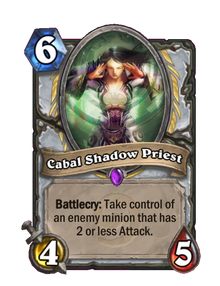 Cabal Shadow Priest is an epic priest minion card, inducted into the Legacy set, formerly from the Classic set. 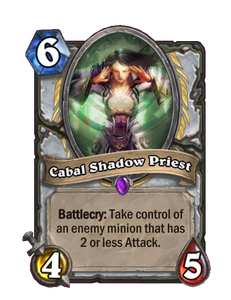 Cabal Shadow Priest is a powerful control card. As well as providing a solid (if somewhat pricey) 4/5 body, it allows the Priest to take permanent control of an enemy minion, essentially a mini-Mind Control.

The key limitation of Cabal Shadow Priest is its attack requirement; only minions with 2 or less attack can be controlled. This generally limits the effect to smaller minions, although some such as Mana Tide Totem or Tundra Rhino can provide quite a bargain. Lazul's Scheme can be used to reduce a minion's attack low enough to steal. Very rarely, a similar effect can be achieved by playing a copy of Aldor Peacekeeper obtained via Thoughtsteal or Mind Vision, guaranteeing that the Shadow Priest steals one of the Paladin's minions; this can potentially include Tirion Fordring.

The value to the Shadow Priest's Battlecry lies not simply in removing an enemy minion, but in effectively granting the player a new minion as well. This makes it equivalent to a combined Destroy and Summon effect, essentially performing three actions: 1) Summon a 4/5 minion; 2) Remove an enemy minion with 2 or less attack; 3) Acquire a friendly minion with 2 or less attack. Because of this three-pronged approach, even when the minion stolen is small, Cabal Shadow Priest can be a very efficient play.

Needless to say, the Battlecry's target is of extreme importance. Valuable targets include Taunts, powerful effects like that of Nat Pagle or Flametongue Totem, and useful Deathrattles such as Loot Hoarder. It may be worth waiting several turns in order to play Cabal Shadow Priest at just the right moment, securing a valuable minion for the player while depriving the opponent of that same minion.

Scarlet Subjugator, Shrinkmeister or Pint-Size Potion can be used to allow the Shadow Priest to take control of higher attack minions, which will revert to their previous attack value at the end of the turn. Topsy Turvy, Twilight Acolyte, and Crazed Alchemist can also be used for this, albeit in a more permanent fashion.

The Cabal is a dark cult that is a sub-organization of the Shadow Council and operates exclusively in Outland. They are led by Grandmaster Vorpil and Blackheart the Inciter. The organization's members have holdings in the Bone Wastes and external ruins of Auchindoun in Terokkar Forest and in the Shadow Labyrinth of Auchindoun.