This article is using {{Card template}}.
See Help:Style guide/Card for how to edit this kind of article.
Edit this article
Bwonsamdi, the Dead
50087 • TRL_260
Regular 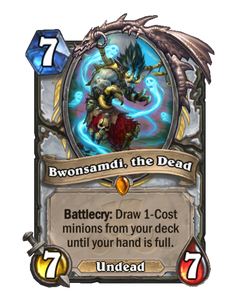 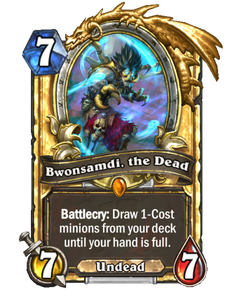 Everyone's dying to meet him. 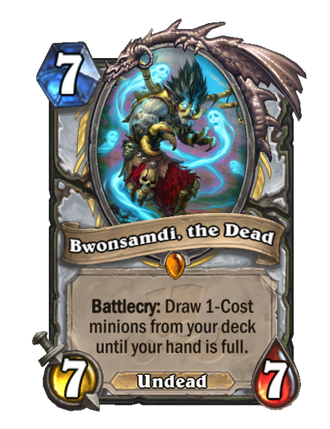 Bwonsamdi, the Dead is a legendary priest minion card, from the Rastakhan's Rumble set.

Bwonsamdi has two main uses. In a control deck, Bwonsamdi can be used to add value by drawing 1-cost minions, maximizing the value of later draws. In the late-game, 1-cost minions are much less valuable than they are in the early-game.

In an aggressive deck, Bwonsamdi can be used as a finisher or used for gaining cards once they have run out. Bwonsamdi, in this case, is akin to

Spirit of the Dead, Bwonsamdi can potentially gain the player a massive boost in tempo, providing that large minions have been shuffled into the deck by the Spirit.

Although Bwonsamdi may be impactful, he is overshadowed by many other cards. In a Control Priest deck, one can use

Curious Glimmerroot to more efficiently generate cards, especially those that are more impactful later in the game. In terms of aggression, Bwonsamdi does not have a valid aggressive Priest deck to support.

Bwonsamdi has seen some play in Standard Combo Priest after the release of Saviors of Uldum to thin out the deck in the late game by drawing Northshire Clerics and Beaming Sidekicks.

If you expect Bwonsamdi to fill your entire hand, make sure you have means to play at least one card before finishing your turn to avoid beginning the next one with an Overdraw.

Bwonsamdi (pronounced "BWAN-sam-dee") is a powerful loa that controls the spirits of the dead, primarily of trolls. Bwonsamdi's temple is the Necropolis, located in Nazmir on Zandalar. The spirits of all trolls on Zandalar go to him upon death, and he brings the spirits of any who worship him into his realm, the Other Side. Bwonsamdi grows more powerful the more souls are in his care.

His face is described as looking like a rush'kah mask. After someone undergoes the rite of binding, a ritual "as old as the world itself", the soul of anything they kill goes to Bwonsamdi. To honor the loa of death, Zandalari will don masks in their rituals and pray to him. Bwonsamdi in turn will either answer in kind, or curse them with pain, depending on his mood.

In Hearthstone lore, Bwonsamdi serves as the patron loa of Bwonsamdi's Zombies, the priest team in Rastakhan's Rumble.