This article is using {{Card template}}.
See Help:Style guide/Card for how to edit this kind of article.
Edit this article
Burly Rockjaw Trogg
2036 • GVG_068
Regular 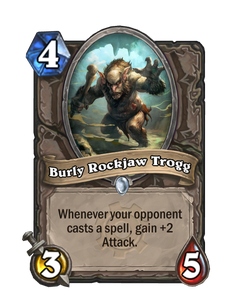 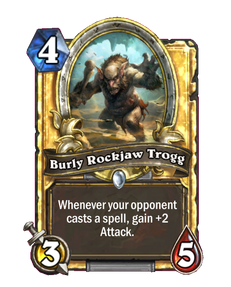 He's burly because he does CrossFit. 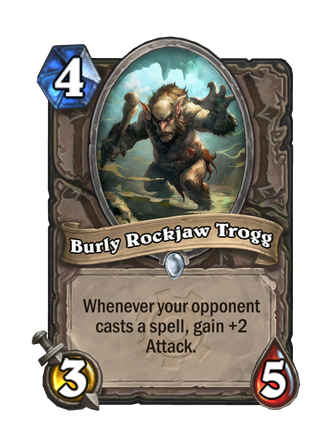 Burly Rockjaw Trogg is a common neutral minion card, from the Goblins vs Gnomes set. 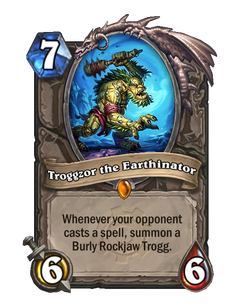 Mana Wyrm, this card punishes the opponent for using spells. This generally makes the use of spells unwise until it is neutralized.

This card is most effective against spell-heavy decks. It is of poor value unless the opponent plays at least 1 spell during its time on the board. With 1 spell cast, it becomes a 5/5, only slightly better than the vanilla stats for a 4 cost minion. However, its growth potential allows it to act as a limit on the opponent's actions, even if it never lives to see significant stat growth. Also effective as a soft taunt against spell-heavy decks, forcing the opponent to remove it before proceeding.

Chillwind Yeti. You can probably use its effect to make an educated guess on whether or not your opponent has a spell. If they are focusing solely on targeting this minion, they may have a spell they want to use, while if they attack your other minions they more likely do not have a spell.

Burly Rockjaw Troggs are members of the Rockjaw tribe of troggs, found in Coldridge Valley in Dun Morogh.

The Rockjaw tribe is a tribe of gray-skinned troggs found residing at Coldridge Valley and Gol'Bolar Quarry in Dun Morogh.

The dwarves' insatiable digging at the Gol'Bolar Quarry unleashed this menacing tribe from their subterranean den. Now, the massing trogg invasion looms over the lands of king Magni Bronzebeard, keeping his forces busy at quelling it.