Edit
watch 02:52
Roblox: DeepWoken - The Loop
Do you like this video?
Play Sound
Bristlesnarl
Regular 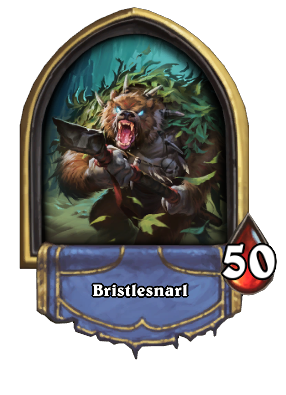 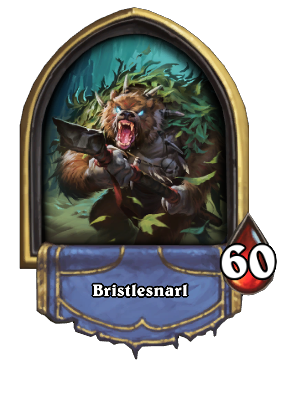 Bristlesnarl is a boss that can be encountered during the Dungeon Run.

Bristlesnarl plays a Hunter deck stocked with expensive spells and minions, but all of this is mitigated by his autocast Hero Power. Because it takes 3 mana and is always the first thing he does each turn, expect Bristlesnarl to not actually do anything else for the first few turns - take this moment of reprieve to set up and pressure him as much as you can. Once he hits the midgame, this is where he starts playing all his cards which he's been discounting all the while, so expect to see something among the lines of multiple Savannah Highmanes and a Call of the Wild guarded by a King of Beasts. The fact that he has up to 60 health also means that he can definitely survive to the midgame where his deck shines. It is very difficult to beat him in the value game unless your deck is extremely focused on Jades or C'Thun, so take any opportunity to go for the face and end the game quickly.

Bristlesnarl
Here... YOU are the hunted!

Bristlesnarl
Keep speaking, so my beasts can find you...

Bristlesnarl
My beasts WILL find you.
Your time is coming...
This is MY hunting ground.
My power only grows.
I know these caves. You know nothing.

Bristlesnarl
The hunt... ends!
There is no escape!
They smell your fear!

Bristlesnarl
Leave the bones as a warning to the others.

Bristlesnarl is unique to hearthstone. He is a hunter who appears to be blind.