This article is using {{Card template}}.
See Help:Style guide/Card for how to edit this kind of article.
Edit this article
Bring It On!
43505 • ICC_837
Regular 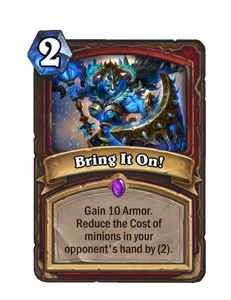 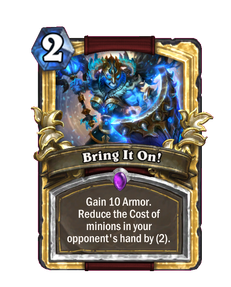 Brrr, it's cold in here. Let's hope she doesn't have an Auctioneer! 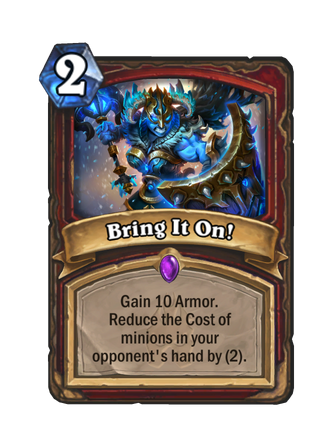 Bring It On! is an epic warrior spell card, from the Knights of the Frozen Throne set.

Bring It On! is a risk-reward style card that generates a large burst of armor, at the cost of giving your opponent a potential boost. It should be kept in mind, that it's possible to hold the card until your opponent's hand is either empty, or not likely to benefit from the reduced cost of it's minions. With this in mind, Bring It On! should be played in a deck that needs help completing their stabilization in the late game.

Control decks often need a burst of Armor in the mid to late game to help save themselves from being killed from sudden burst damage, such as a Charge minion or a Weapon. If played in a Control deck, Bring It On! will often not get punished from the downside, as it is unlikely to be played until relatively late into the game, when the opponent either has no minions left in their hand, or would be capable of summoning them with ten Mana available anyway. Bring It On! also has some synergy with Warrior's board clears such as

Brawl, allowing you to motivate your opponent to play out extra minions before you clear the board.

In Arena, Bring It On! can be a poor card, as it does not impact the board in any way and will likely allow your opponent to snowball the lead from you. Spending a card for what is effectively 10 healing does not help you come back from the position that caused you to need healing in the first place, and therefore you will likely start the next turn in the same position as before.