Edit
watch 02:52
Roblox: DeepWoken - The Loop
Do you like this video?
Play Sound
Bright-Eyed Scout
Regular 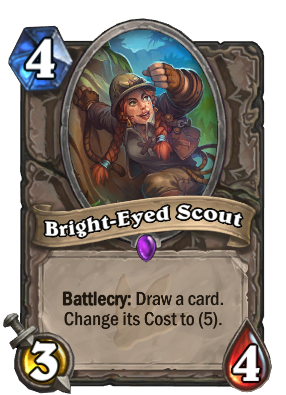 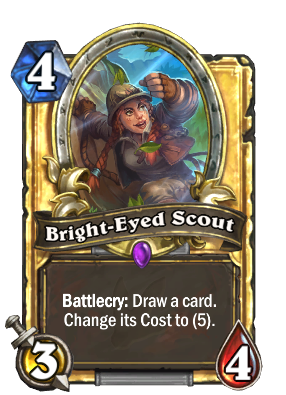 Battlecry: Draw a card. Change its Cost to (5).
Flavor text

Bright-Eyed Scout is an epic neutral minion card, from the Journey to Un'Goro set.

Bright-Eyed Scout can be obtained through Journey to Un'Goro card packs, or through crafting.

If played on curve, this card's Battlecry means that the card drawn by her effect will be instantly playable on the next turn. Due to the mandatory altered cost of 5 mana, this minion is best included in decks with high-cost cards which can benefit from the reduced Cost, such as Ramp Druid. Conversely, Bright-Eyed Scout will be counterintuitive in aggressive decks using cheap minions. On her own, this minion has a sub-par 3/4 statline.

Bright-Eyed scout is typically a solid 4-cost draft in Arena, where its card-cycling ability is inherently more powerful. It is a valuable top-deck in the lategame, as from 9 mana onward it can be played alongside anything it draws, potentially enabling huge tempo gain with cards such as Bonemare or Ultimate Infestation.