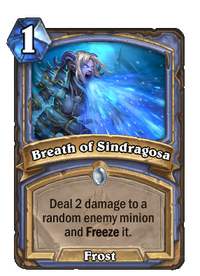 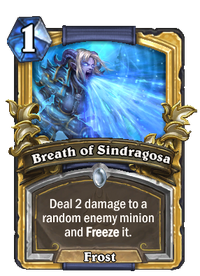 Deal 2 damage to a random enemy minion and Freeze it.
Flavor text

Is it cold in here or is it just Sindragosa?

Breath of Sindragosa is a common mage spell card, from the Knights of the Frozen Throne set.

Breath of Sindragosa can be obtained through Knights of the Frozen Throne card packs, or through crafting.

Breath of Sindragosa can efficiently kill a small minion or delay a big one for a turn, essentially comparable to a random, cheaper Frostbolt for minions. If the opponent is playing many small minions, it can kill a target on its own; if they're playing fewer large ones, this card can delay your opponent and let you develop your tactics.

Overall, Mages tend to prefer different cards based on playstyle. For aggressive play, Mages run more of Arcane Missiles for multiple hits and possible direct damage, and slower Mage decks use board-wide freezes Frost Nova and Blizzard. This card is versatile, but isn't consistent enough for either style.

Breath of Sindragosa, named after the Queen of the Frostbrood, is a level 100 Frost death knight talent which causes the death knight to continuously deal Shadowfrost damage to enemies in a cone in front of them, rapidly draining their Runic Power resource. When all of the death knight's Runic Power has been depleted, the ability ends.