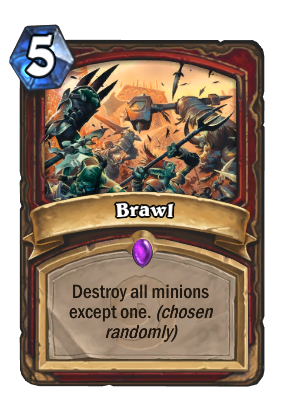 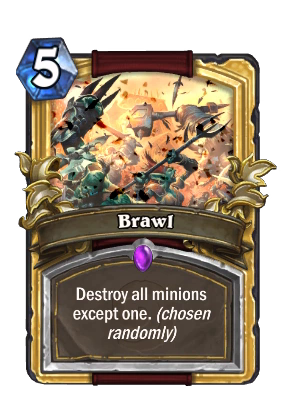 Destroy all minions except one. (chosen randomly)
Flavor text

Do you know the first rule of Brawl Club?

Brawl is an epic warrior spell card, inducted into the Legacy set, formerly from the Classic set. 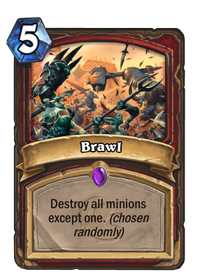 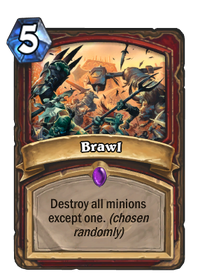 Brawl can be obtained through Classic card packs, or through crafting.

Two copies of regular Brawl (Core) are obtained for raising warrior to level 7.

Two copies of golden Brawl (Core) are obtained for winning 250 games as warrior.

Brawl (Core) is uncraftable and cannot be crafted or disenchanted.

Brawl is both highly tactical, and wildly unpredictable. The outlook for the card depends entirely on the minions currently on the battlefield. If the board is dominated by your opponent, it can be a very effective way to reduce the pressure. Generally speaking, the card offers an advantage to whichever player has the fewer or less valuable minions on the field. Due to Warriors having very good access to weapons, a single attack on the surviving minion is often all that is needed to completely reset the board, with the warrior's Hero Power allowing them to absorb damage they expose themselves to.

Brawl is one of the most random cards in the game, and should not be played without consideration of the many possible outcomes. The major use of Brawl is for countering a substantial minion disadvantage. Note that the card does not require you to have any minions on the field; it can be played against 7 enemy minions, and will simply destroy all but one of them, regardless of their health or abilities, for only 5 mana. In this situation, it is extremely effective.

Other uses of Brawl include playing it when you have one or several weak minions, in order to have a good chance of removing a single, very powerful enemy minion. However, this of course has the potential to backfire badly.

At the cost of just 5 mana crystals it can also be used early in the game as a hard wipe when your starting draw is significantly weaker than your opponents, which is often the case versus aggro decks.

Because Brawl is a destroy effect similar to Twisting Nether, it is ineffective at removing sticky Deathrattle minions like Harvest Golem and Savannah Highmane, but highly effective against minions with Divine Shield.

If played while having Sylvanas Windrunner on the battlefield, Brawl has a very powerful effect. In this case, you will most certainly clear the entire battlefield while keeping one minion for yourself, whether this is Sylvanas or the minion she took control of.

When playing Brawl, remember to take into account the lengthy animation, and leave yourself enough time to take any actions afterwards, especially as you will unable to do so during it.

While this card does not appear to be based on a specific ability from World of Warcraft, its flavor text references the film Fight Club, which is also quoted in the introduction to the Brawler's Guild in WoW.

The Brawler's Guild is the name for a number of underground fighting rings that have sprung up in recent times in Orgrimmar and Stormwind. Open only to those clutching a Blood-Soaked Invitation, these are brutal arenas where hardened adventurers can go to do battle against a range of special bosses. A unique solo PvE challenge, fights are performed in the centre of the ring for all to see, and success is rewarded with progression through the guild's ranks and access to even tougher opponents, as well as the grudging respect of your fellow brawlers.

The Tavern Brawl game mode also fits with the concept behind this card, although it was not added until more than 2 years later.