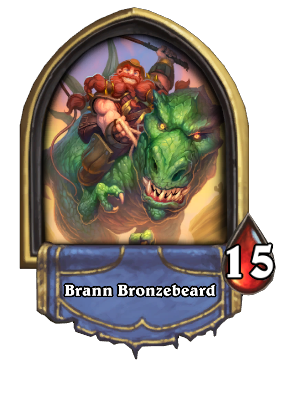 Riding on a dinosaur and looking for a fight, Brann's ready to finish this.

Brann Bronzebeard is a hero that the player can pick in a Tombs of Terror run. He represents the dual class of Hunter and Warrior. 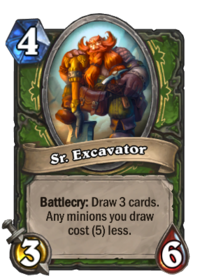 Much more than the other heroes, Brann can utilize a strategy around Hakkar, the Soulflayer and his generated Corrupted Blood as a powerful win condition against any Plague Lord. For that strategy the hero power Dino Tracking needs to be selected and "Bombs away" buckets need to be prioritized (as these contain Hakkar and thus re-picking that bucket increases the chances to get Hakkar).

Obviously, the overall strategy is to have the Plague Lord die from blood corruption, a powerful fatigue strategy.

The reason why Brann is such a good candidate for this strategy is because Dino Tracking diminishes the chances of drawing Hakkar as one of the last cards to almost zero while at the same time having a strong control of when to draw the Bloods and when not.

For the successful execution of the strategy it is vital to understand how Corrupted Blood works, in particular when it comes to Plague Lord phase switches.

Also a note of warning: be cautious with cards that say "draw a card" - cards drawn other than during your turn start are not subject to your hero power and hence could draw you into a corrupted blood. In addition make sure to have a big deck. You will want to play a lengthy control match either during phase 1 or phase 2 before you drop Hakkar, so you need to be able to last for long. 45+ cards *or* ways to increase your deck (Direhorn Hatchling, Dire Frenzy, Augmented Elekk, Gyrocopter, ...) are highly recommended.

Let us now dive into the intricacies of Corrupted Blood. For that, read the inner workings of the card as explained here: Notes on Hakkar. Note that new copies of corrupted blood are shuffled whenever a terminal card is drawn. In addition, for Plague Lords, this is also triggered whenever they switch phases.

If a phase change occurs while drawing Corrupted Blood (from Hakkar, the Soulflayer), then the whole deck will still be replaced in the very moment the life of the Plague Lord drops below 101/201, and for each Corrupted Blood drawn until that point, 2 copies will be placed into the new deck. Example: If a Plague Lord has only bloods in his deck, but starts his turn with 102 health, then one blood is drawn, his life drops to 99, the deck is replaced completely, then the hand is refilled and finally 2 copies of Corrupted Blood will be placed into the remaining deck. If the Plague Lord has say 16 bloods and no other cards, and 120 health at the start of his turn, then he will draw 7 of the 16 bloods, shift to the new phase, replace his deck, refill his hand and finally 14 copies of Corrupted Blood are placed into the remaining deck. If you can force your opposing Plague Lord to draw cards, e.g. because he has Octosari on the board and you can kill it, then note that at this point ideally only very few terminal cards are left in his deck.

Here are some outcome examples of the next card draw:

To minimize chance and avoid an outcome in which your opponent gets only 2-4 new copies of Corrupted Blood into his deck during the phase shift, you might want to play a heavy control fatigue match and only drop Hakkar when your opponent's deck is almost empty. Make sure that *you* have means to destroy Hakkar, otherwise you might want to drop Hakkar when only 3-4 terminal cards are left in your opponent's deck to have a high chance of being able to kill Hakkar in combat.

You might want to do this control game maybe in phase 2, if you can. Otherwise, if you do it in phase 1 and you manage to put say 20 copies of Corrupt Blood in his deck, then randomness and chance might still have you end up in a similar situation as explained above when switching to phase 3: your opponent might just get 2 or 4 copies in his new deck.

In all cases, the phase in which you play the control game, restrain yourself from hitting face - rather maximize the amount of bloods you can put in the deck. But be aware and do some calculation in the end: It might be beneficial to hit face for some damage. Example: opponent has 12 Corrupted Bloods in his deck, fatigues for 4 damage next but has 145 life. He will get 40 damage now and then do the transition with only 4 new copies of Corrupted Blood. If you have a 20/20 to go face with, then he will end up shuffling 18 copies in his new deck.

The strategy requires Dino Tracking, but the starter deck is free to choose. The "Taming Dinos" deck is rather good for the strategy, as it already boasts 2 minions that can provide extra protection against fatigue damage. The probably most useful signature treasure is Flo Slatebrand, giving additional chances to get powerful treasures to help with the control matchup.

Uldum is filled with ancient wonders… We ought to grab a few while we’re here.

I’m not scared o’ field work. I might learn a new trick or two.

What should I focus on? I’m a skilled hunter but also quite the warrior.

The baddies will put up more of a fight as we delve deeper into Uldum.

This place isn't fer fightin'. But I can recruit some help!

Oh, that smarts! Well, back at it. We’ll start all over again.

Friendly Encounters
Oh, what a sight fer sore eyes! A friendly inn!
What's this? A wee tavern? …here!?
This is the perfect opportunity to drum up some new recruits.

Turn 1 on first boss in Chapter 1

Brann Bronzebeard
This city's a ruin! What does E.V.I.L. want here?
Elise Starseeker
The ancient Tol’vir had maps to every Titan artifact in the region.

Brann Bronzebeard
The desert… keeps twistin' around on itself!
Elise Starseeker
That’s the Plague of Madness. It’s twisting our perceptions.

Brann Bronzebeard
This place gave me the willies before it were haunted by death.
Elise Starseeker
The Plague Lord of death is no different than the others. We will find a way to beat it.

Brann Bronzebeard
I cannae believe this place is bein’ used fer E.V.I.L.!
Elise Starseeker
It is fitting that Rafaam would choose a plague of wrath to strike at us.

Yer startin' ta tick me off!

Ah've got ya now!

Nothin' more important when ridin' a dino than staying comfortable.

My new friend's got a reaaaaal meanstreak! Wanna meet 'em?

Ah don't worry, yer gonna do great out there!

Ya come from a long line of explorers, Flo; I know ye won't disappoint!

Ah've got a HUGE egg, ah hope you're ready to meet what's inside!