This article is using {{Card template}}.
See Help:Style guide/Card for how to edit this kind of article.
Edit this article
Brann Bronzebeard
2949 • LOE_077
Regular 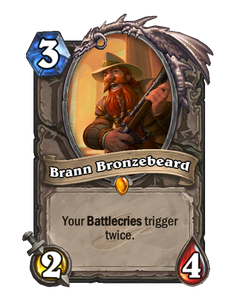 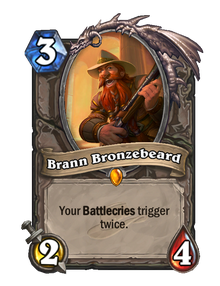 Brann Bronzebeard is a legendary neutral minion card, from the League of Explorers set.

A very strong effect that can snowball a game when left unchecked. Its worthy to note that many Battlecries don't work well with this card when triggering twice (such as Acidic Swamp Ooze, Alexstrasza, etc.) and some could have disastrous results if used haphazardly (like Mad Bomber/Madder Bomber).

Combining this minion with Loatheb will prevent almost any enemy spell-casting next turn, by increasing the cost of all enemy spells by 10 mana.

The youngest of the three Bronzebeard brothers, Brann is one of the greatest explorers to ever wander Azeroth.

From the frigid mountains of Northrend to the depths of Uldaman, wherever ancient mysteries call, he will follow.[9]

Brann returns in Saviors of Uldum with the rest of the League of Explorers to stop the League of E.V.I.L.'s plans in Uldum, this time being known as Dinotamer Brann.

Brann Bronzebeard is the youngest of the three Bronzebeard brothers, with King Magni Bronzebeard and Muradin Bronzebeard being his elders. Brann is an active member of the Explorers' League, following closely in the footsteps of his brother Muradin.

One of the greatest explorers to ever wander the lands of Azeroth, Brann is recognized and welcomed across the known world. The warm, courageous dwarf has made friends and acquaintances in nearly every charted land - and presumably those uncharted as well. Brann has spent many years mapping out the remote corners and hidden nooks of the Eastern Kingdoms for his beloved Explorers' Guild, which he helped to found. With the discovery of Kalimdor, Brann was one of the first dwarves to tread the unknown paths of the ancients. He has a monkey pet named Glibb.