This article is using {{Card template}}.
See Help:Style guide/Card for how to edit this kind of article.
Edit this article
Boulderfist Ogre
1686 • CS2_200
Regular 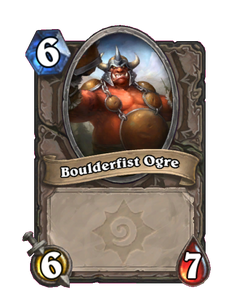 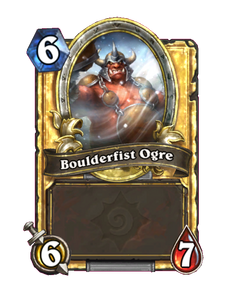 "ME HAVE GOOD STATS FOR THE COST" 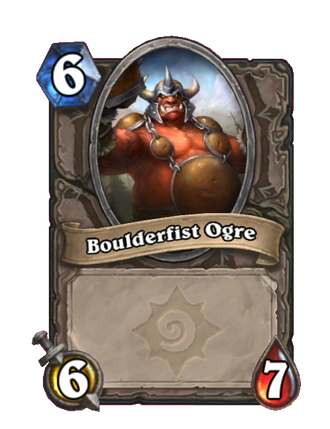 Boulderfist Ogre is a neutral minion card, inducted into the Legacy set, formerly from the Basic set. 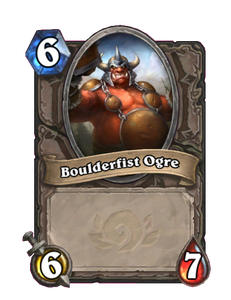 Regular and golden Boulderfist Ogre are uncraftable and cannot be crafted or disenchanted.

Boulderfist Ogre is a vanilla card with relatively high Attack and Health. While it lacks any special abilities, its stats make it a reliable choice and common substitute for rarer, high-power cards like

Ragnaros the Firelord or

Sylvanas Windrunner. Notably, its 6 Attack falls just short of being targetable by the Battlecry of

The Boulderfist clan is a clan of ogres that live throughout the Arathi Highlands in Azeroth and Nagrand in Outland (hinting that it may have parted when the Dark Portal closed at the end of the Second War).

Their main bases on Azeroth include Boulder'gor and Boulderfist Hall; they also control a significant portion of present-day Stromgarde.

On Outland, a large contingent of Boulderfist ogres roam throughout Nagrand (clefts of Halaa, Burning Blade Ruins, and the hills northwest of Kil'sorrow Fortress) and parts of Terokkar Forest (Bleeding Hollow Ruins). Their leader is a half-orc half-draenei named Lantresor of the Blade.