This article is using {{Card template}}.
See Help:Style guide/Card for how to edit this kind of article.
Edit this article
Booty Bay Bodyguard
1140 • CS2_187
Regular 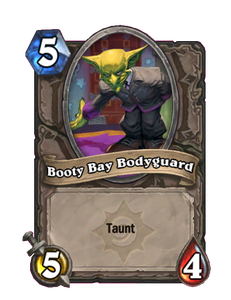 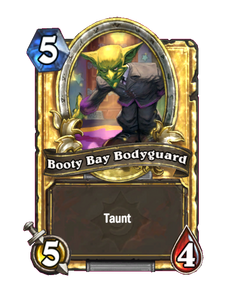 You can hire him... until someone offers him enough gold to turn on you. 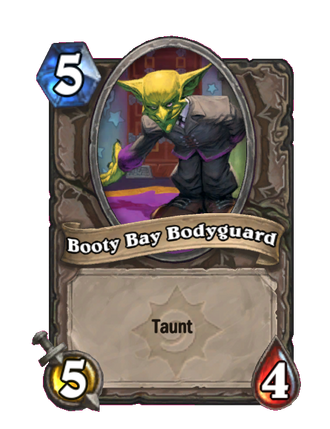 Booty Bay Bodyguard is a neutral minion card, inducted into the Legacy set, formerly from the Basic set. 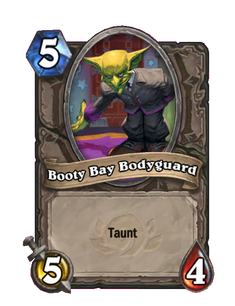 Regular and golden Booty Bay Bodyguard are uncraftable and cannot be crafted or disenchanted.

This minion has relatively low Health for a Taunt of this cost, and so can be removed by cheaper attackers such as a

Sen'jin Shieldmasta seems to be a better choice for most decks as a defender. However, his higher attack can allow him to double as a substantial attacking creature and a reasonable defender. Other alternatives include

Fen Creeper, which has the same total stat values, but weighted more toward defence.

A strictly better card to consider as a replacement is

Evil Heckler. Both cards have Taunt and the same stats, but Evil Heckler costs one less mana.

Booty Bay is a large pirate city nestled into the cliffs surrounding a beautiful blue lagoon on the southern tip of Stranglethorn Vale. The city is entered by traversing through the bleached-white jaws of a giant shark.

Run by the Blackwater Raiders who are closely associated with the Steamwheedle Cartel, the port offers facilities to any traveler passing through, regardless of their faction. Combined with the world renowned Salty Sailor Tavern, it is one of the most popular locations in Azeroth.

Outside of Booty Bay, on the island of Janeiro's Point, is the giant statue of Baron Revilgaz.

Baron Revilgaz, ruler of this city, is hiring all the help he can get against the pesky Bloodsail Buccaneers and other threats of the city. He resides, together with the leader of the Blackwater Raiders, Fleet Master Seahorn, at the top of the inn of Booty Bay.