This article is using {{Card template}}.
See Help:Style guide/Card for how to edit this kind of article.
Edit this article
Boommaster Flark
47841 • BOT_034
Regular 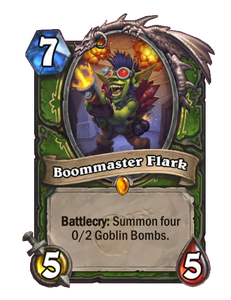 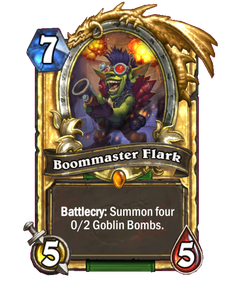 Every good plan requires a bit of patience. And a lot of explosives. 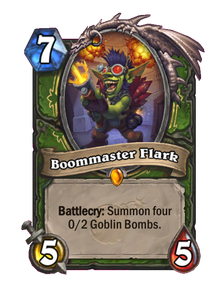 Boommaster Flark is a legendary hunter minion card, from The Boomsday Project set. 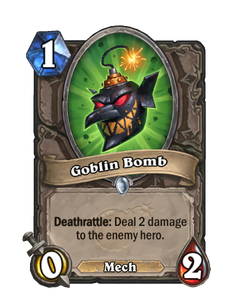 Boommaster Flark's power comes in his ability to drop multiple bodies at once. Although playing him often does not provide immediate value, the Goblin Bombs he spawns can be exploited on the following turn. The amount of face damage he provides makes him a potent finisher in decks that contain Mech synergies. They can be detonated all at once with Void Ripper or Mossy Horror, but even without those cards the Goblin Bombs make great targets for Magnetic minions and Fireworks Tech. Necromechanic and Feign Death can double their lethality if the opponent is not prepared for them.

The best time to play Boommaster Flark is when your opponent is at low health, where destroying the Goblin Bombs would put them at a huge risk at dying or outright kills them.

Flark is unique to Hearthstone.

Another checkup, huh? The big boss man couldn’t come down here himself, eh? Too good to mingle with the little guys, eh?

Here. Hold this for a sec.

Aw, c’mon. It was funny! Plus that shield kept you in one piece. Oh, speaking of pieces, you should see the look on the face-plate of the last bot I played that joke on! It might still be lying around here somewhere. . . .

Scientist? I’m no scientist, spark plug. I’m an engineer and proud of it. There ain’t no theories or hypotenuses going on in the Boomatorium. Everything I work on is practical. And loud, heh heh.

Bombs!? Please, I prefer the term “fireworks”. My work brings joy, AND huge explosions, to everybody. Oh, and not just explosions! Fireworks can do a lot before they blow up, y’know. Imagine the possibilities of rockets in public transit! Get a load of this! I call it the Boomzooka! You just load up the passengers here, light the fuse, and then they zoom outta there at high velocity! THEN they explode. Still workin’ on that part. I mean, sure, it’s got pizzazz but nobody’ll use the Boomzooka if they don’t survive the trip.

Fine, fine. You go tell your sell-out of a boss I need somebody else to gimme a hand, then. Oh, and another thousand kilos of thorium, seaforium, and saronite, some mana crystals, a case of Kaza Kola. . . and a sandwich. Extra peppers.