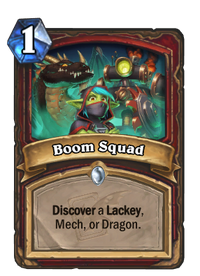 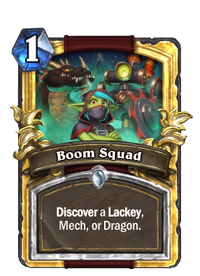 Discover the meaning of squad goals.

Not to be confused with Bomb Squad.

Boom Squad is a common warrior spell card, from the Galakrond's Awakening set.

Two copies of regular Boom Squad are obtained by defeating The Amazing Reno in Galakrond's Awakening's Chapter 4 of E.V.I.L. campaign.

Boom Squad will always provide an immediate, cheap play if needed. It also typically offers one midrange and one lategame card as well, although the cost of Mechs and Dragons are not as restricted as Lackeys. This makes it flexible since it can be played for any game state, although very random since it provides little variety in the quality of each card offered.

This card competes with Omega Assembly, which also provides an option to fill out the Warrior's curve but has the added benefit of being a strong value generator in the lategame.