This Brawl sees players doing battle in the roles of two special heroes - Boom Bot and Annoy-o-Tron - each has its own Hero Power and semi-randomised premade deck, mostly made up of Mechs and cards from Goblins vs Gnomes.

Matches take place on the Goblins vs Gnomes battlefield. 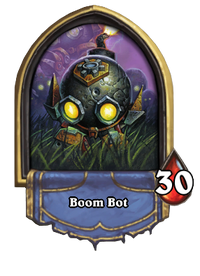 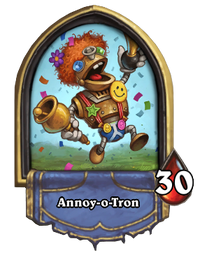 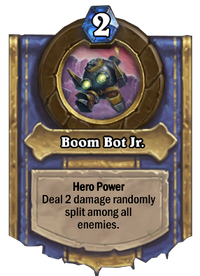 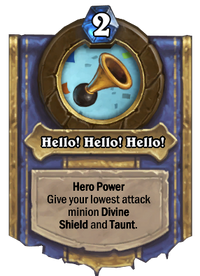 The decks for this Brawl are believed to be semi-randomised. Weapons, spells and certain minions appear to be fixed and present in each match, while most minions - almost all Mechs - appear to vary.

During the early game, holding onto cheap removal spells such as Darkbomb and Flamecannon is key, especially if the Annoy-o-Tron player is going second, in order to remove the Annoy-o-Tron player's minions before they can be buffed. Failing that, the Boom Bot's Hero Power and Mad Bomber can be used to break Divine Shields, if not destroy weaker minions completely. Minions such as Harvest Golem, Piloted Shredder and Piloted Sky Golem can help to wrest board control back from the opponent since they will always spawn another minion when destroyed. By the late game, combinations and plays such as Goblin Blastmage and another Mech; Dr. Boom; Twisting Nether and Crush can be utilized to further control the board.

If you already have a considerable Health advantage, using Shadowbomber in conjunction with Youthful Brewmaster and Ancient Brewmaster can deal significant damage to the opponent during one turn, if not outright kill them by late game.

The Annoy-o-Tron deck focuses on Taunt and Divine Shield minions, in addition to weapons and spells that boost or benefit from minions with those abilities. By giving friendly minions Divine Shield, the Annoy-o-Tron player can make efficient trades with enemy minions for early board control. On the other hand, the Divine Shields can easily be broken by the Boom Bot's Hero Power, and array of damaging minion effects and spells. Most of the Annoy-o-Tron's early game minions are likewise either easily destroyed or weak when not under the effect of buffs; in addition, the Annoy-o-Tron's Hero Power is useless with an empty field, and most of its other minions such as Tinkertown Technician, Tinker's Sharpsword Oil and Mekgineer Thermaplugg require friendly minions on the field to make the most of their effects. Combined with Annoy-o-Tron's lack of removal spells aside from Recycle and Holy Nova, the Annoy-o-Tron player may have a hard time obtaining victory if gaining early game advantage isn't possible.

During the first few turns, it is vital to get cheap minions on the field so they can be buffed with Annoy-o-Tron's Hero Power, such as Snowchugger, Whirling Zap-o-matic and Anodized Robo Cub. Using The Coin if going second helps with this greatly, especially in scenarios that give you a Whirling Zap-o-matic with Windfury, Divine Shield and Taunt. By trading into the Boom Bot's minions with your own Divine Shield minions, then using the Hero Power again, you can maintain board control with one or two minions that stay alive over multiple turns. The Annoy-o-Tron's weapons can also be used in the early game to make sure you kill off the Boom Bot's minions and keep existing Divine Shields on your own minions intact. Where possible, use the effects of other cards such as Upgraded Repair Bot, Bolster and Iron Sensei to further buff your minions; a group of buffed minions by Turn 5 can prevent the Boom Bot player from regaining advantage, assuming you've been diligently maintaining control already.

By the late game, it becomes harder for the Annoy-o-Tron player to maintain momentum as the Boom Bot player gains access to more powerful cards that get around the Annoy-o-Tron's Shields and Taunts, such as Crush, Dr. Boom's spawned Boom Bots and Twisting Nether.

Since Annoy-o-Tron's Hero Power will always target the friendly minion with the lowest Attack (or choose randomly in the event of a tie), timing of when you play minions or use the Hero Power will matter. For example, playing Iron Sensei followed by using the Hero Power may put Iron Sensei in danger by forcing your opponent to attack it once its Divine Shield is removed, assuming Iron Sensei is the lowest-Attack minion on your field. Changing the Attack of your own minions with Shrinkmeister and Blessing of Might can allow you to have a little more control in buffing the minion you want.

Almost all Boom Bot emotes produce the summoning soundbite from the Boom Bot minion. A few, such as the Threaten and Running out of time emotes, produce the minion's attack soundbite instead.