Book of Heroes is a single-player game mode first released on September 15, 2020.

It uses a classic linear adventure format with an appearance similar to Dungeon Run screen. Book of Heroes is about telling the journeys and stories of the heroes who represent the classes in Hearthstone, like Jaina Proudmoore. Most of the stories told in this game mode are based on canonical stories of World of Warcraft.

Book of Heroes will feature a chapter for each of the ten current classes, for a total of 80 missions or bosses. It is completely free to play and available to everyone. Additionally, completing a class's story rewards the player a corresponding class pack.

Mage was the first class and Jaina Proudmoore's story was the first story to be introduced.[1] New missions will be released over the course of the coming months. 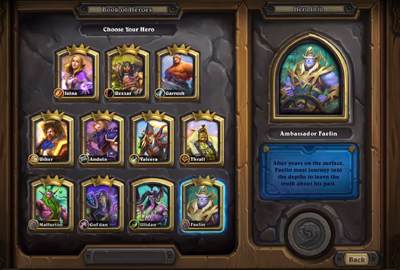 Below are the current lists of boss encounters and lists of player characters of Book of Heroes. Note that the lists will be updated when there is a new class story to be released over the following months.

Dates marked with an asterisk (*) are only datamined and the date and order are subject to change.[2][3] 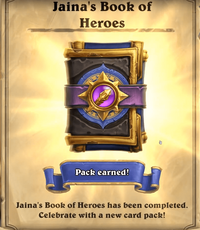 A hero's Book of Heroes has been completed

Upon completing a class' story, the player can claim a corresponding class pack. As soon as the player defeats the final boss of a story, a following note, titled <Hero name>'s Book of Heroes, appears:

<Hero name>'s Book of Heroes has been completed. Celebrate with a new card pack!

In addition to the collectible cards from card sets, Book of Heroes brings many unique cards, Playable Heroes, Hero Powers and many more available only during the boss encounters.