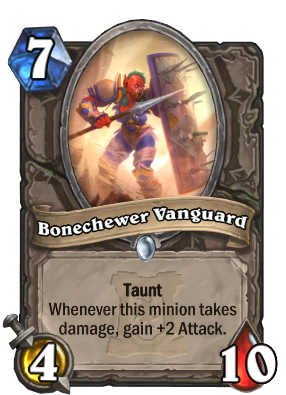 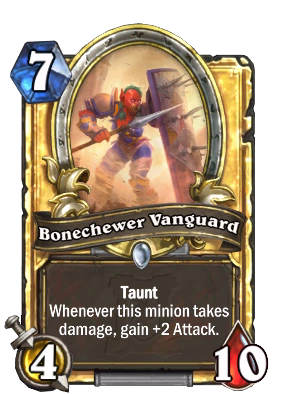 She came here to taunt you and chew on bones, and she's all outta bones.

Bonechewer Vanguard is a common neutral minion card, from the Ashes of Outland set.

Bonechewer Vanguard can be obtained through Ashes of Outland card packs, through crafting, or as an Arena reward.

A larger version of Bonechewer Brawler. The initial 4 attack is not very threatening to trade into, but the large health pool means it will often require multiple attacks to trade into. However, the high mana cost makes it more susceptible to hard removal. Bonechewer Vanguard is most powerful in Arena, where removal is more scarce and your opponent is likely to have several small minions on the board.

It is unknown if there are any remaining members of the clan that haven't been turned into fel orcs.