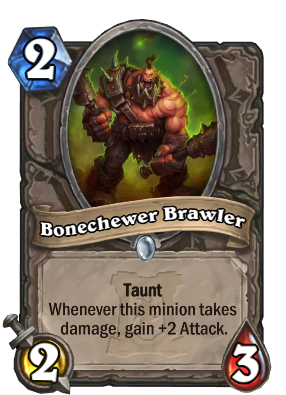 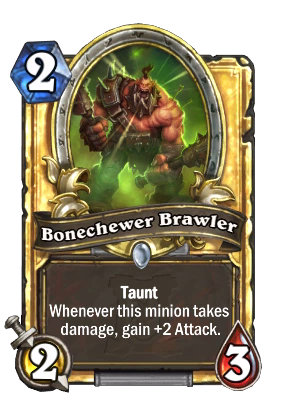 When you get this swole, arrows are basically free acupuncture.

Bonechewer Brawler is a common neutral minion card, from the Ashes of Outland set.

Bonechewer Brawler can be obtained through Ashes of Outland card packs, through crafting, or as an Arena reward.

A solid 2/3 taunt that can help fill out the early game. While its ability usually won't have much impact, it will often require 3 damage from your opponent in a single turn, which can be difficult in the early game. The generic nature of this card makes it great for Highlander builds, particularly tempo builds.

Warrior can combine this card with self-damaging effects like Risky Skipper and Whirlwind to manually activate the effect. Priest can use Lesser Heal to attack into a minion and heal the brawler, keeping the attack buff and full health.

It is unknown if there are any remaning members of the clan that haven't been turned into fel orcs.