This article is using {{Card template}}.
See Help:Style guide/Card for how to edit this kind of article.
Edit this article
Bomb Wrangler
56107 • YOD_024
Regular 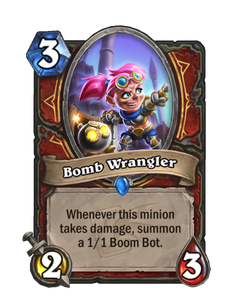 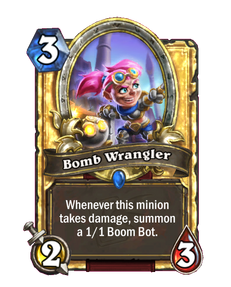 Bomb Wranglers tend to have short fuses and even shorter lifespans. 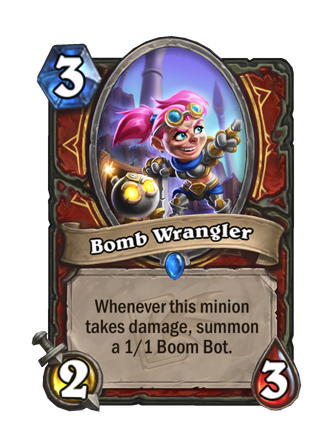 Bomb Wrangler is a rare warrior minion card, from the Galakrond's Awakening set. 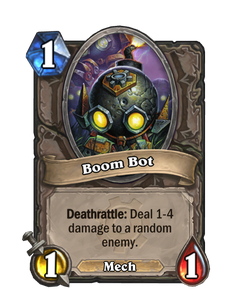 Bomb Wrangler is an excellent Tempo Warrior card. While the body is small, the effect makes the card fairly sticky and dangerous. Like with other Boom Bot generating cards, Boom Bots are dangerous for your opponent to remove as they can represent lots of damage (although unpredictably). When played alone on the board, Bomb Wrangler will typically be traded into and leave a single Boom Bot. By itself this is decent value, comparable to a

Harvest Golem. This minion has increased synergy with cards like

Risky Skipper, which can potentially clear the opponent's board and deal significant damage to them by summoning and sacrificing multiple Boom Bots in one turn. While this wastes the Boom Bot's 1/1 bodies, the Deathrattle makes up for that.

Forbidden Words will destroy Bomb Wrangler without summoning any Boom Bots, so be cautious playing this card against Priest.