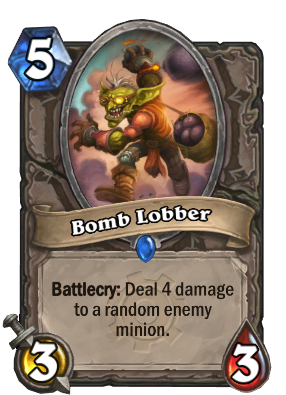 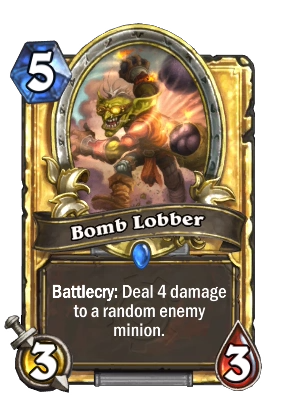 He lobbies Orgrimmar daily on behalf of bombs.

Bomb Lobber is a rare neutral minion card, from the Goblins vs Gnomes set.

Bomb Lobber can be obtained through Goblins vs Gnomes card packs, or through crafting.

Bomb Lobber is a weak minion with a powerful Battlecry. The main downside of his Battlecry is that its target is chosen at random from all enemy minions on the board.

One way to counter Bomb Lobber's unpredictability is to play him when faced with only 1 enemy minion - guaranteeing that that minion will suffer the damage. Otherwise, try to use him when any of the available minions would be an effective target for his damage. Bomb Lobber is least valuable against weak minions, or when high-value targets are hidden among several other, less valuable minions.

Bomb Lobber's basic stats are very poor for his cost, making his Battlecry the main consideration when playing him. However, this makes him a great target for Recombobulator, allowing you to swap a plain 3/3 minion for a random 5-cost minion - likely a very good trade.