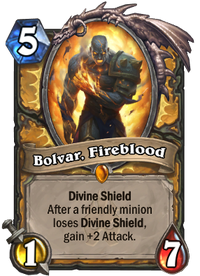 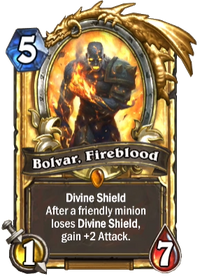 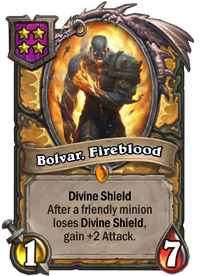 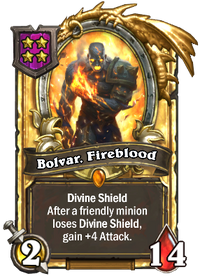 For the minion card from the Goblins vs Gnomes set, see Bolvar Fordragon.

Bolvar, Fireblood is a legendary paladin minion card, from the Knights of the Frozen Throne set.

Bolvar, Fireblood can be obtained through Knights of the Frozen Throne card packs, or through crafting.

Gift of Luminance gives you a Round Two and potentially +4 Attack for each Bolvar.

Since his base attack is 1 and he don't recieve bonus health for Divine Shields, a effective summoning combining Sword of Justice and then a Rallying Blade for a multiple +1/+1 buff.

This minion represents Bolvar Fordragon as he appeared while a prisoner of the Lich King.

Highlord Bolvar Fordragon was a venerated paladin of the Alliance and served as the Regent of Stormwind following the disappearance of King Varian Wrynn. Upon Varian's return, Bolvar was named the commander of the Alliance forces sent to take the battle to the Scourge in Northrend. After the treachery of Grand Apothecary Putress at the Battle of Angrathar the Wrathgate, Bolvar was killed by the Forsaken Blight and reanimated by the flames of the red dragonflight.

Bolvar's body was altered by the dragons' flame, and was taken by the Scourge into Icecrown Citadel, where he was tortured by the Lich King in an attempt to bend him to his will. However, the noble spirit of Bolvar resisted the Lich King's depravations. After the death of Arthas Menethil, the mortal host of the Lich King, Bolvar demanded that Tirion Fordring place the Helm of Domination, containing all of the powers of the Scourge, on Bolvar's head so that he would forever be the jailer of the damned - imprisoning the Lich King within the Frozen Throne once more and containing the threat of the Scourge.