This article is using {{Card template}}.
See Help:Style guide/Card for how to edit this kind of article.
Edit this article
Bolf Ramshield
2595 • AT_124
Regular 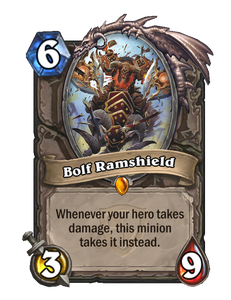 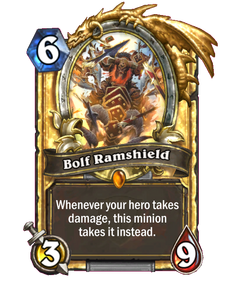 Bolf keeps coming in 2nd at the Grand Tournament. It might be his year this year, if Lebron doesn't enter. 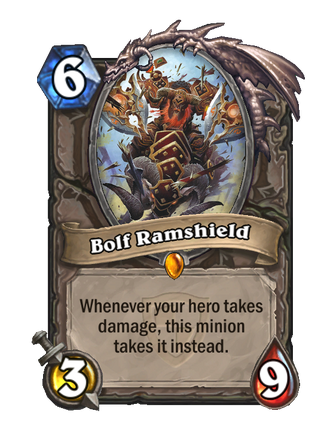 Bolf Ramshield is a legendary neutral minion card, from the Grand Tournament set.

This minion's ability can be used as a modified Taunt that only prevents taking damage from the attacks against your hero. Normal Taunt minions can be bypassed by using direct damage, such as

Steady Shot, but Bolf Ramshield will redirect this damage towards himself, if the hero is targeted. However, Bolf is less useful than Taunt against enemy minions as he cannot protect your other minions and can also be "traded" into without dealing retaliatory damage if enemy minions target your face.

Water Elemental, useful if your deck relies on weapons to help you win the game.

Bolf is an original Hearthstone character.[12] He was formerly an aspirant, but has been promoted recently.[13]