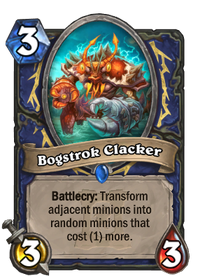 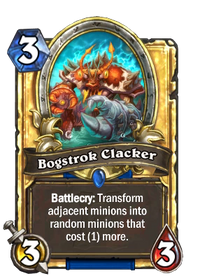 This clacker's crackers for hacking slackers into whack attackers.

Bogstrok Clacker is a rare shaman minion card, from the Ashes of Outland set.

Bogstrok Clacker allows you to cast evolve minions left and right of this minions while having a solid stat line.

Before playing this card, make sure you attack (if applicable) on those adjacent minions first since they will become exhausted losing their attack. Also there is a chance that those transformed minions might have Charge or Rush so they can attack again.

Lobstrok are a race of humanoid lobsters native to Draenor before its destruction. During the destruction of Draenor many of these creatures were killed, however, fortunate ones that were living near the Zangar Sea managed to survive in what later would be called Zangarmarsh. Lobstrok are well adapted to living underwater, but are usually found on beaches and islands similar to the makrura and murlocs of Azeroth.