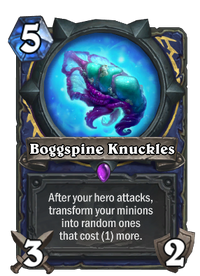 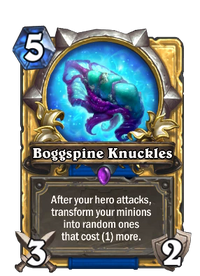 After your hero attacks, transform your minions into random ones that cost (1) more.

I would NOT want to put my hand in there. It's... SQUISHY.

Boggspine Knuckles is an epic shaman weapon card, from the Ashes of Outland set.

While using this weapon with minions, it is better to attack using your minions first even if the weapon can trade against the minion. If you can, prioritize attacking enemy hero as you may get a evolved minion that can get Charge to close out the game. Try to keep your minions alive as well as they can be evolved to a better cost minion. Once your hero attacks, transformed minions will then become exhausted and lose their attack, if available before transformed, unless they get Charge or Rush.

As like other Evolves, the minions you get are unreliable even though they cost 1 more which usually contains powerful stats or minions but you might get a high cost but a low statline which can be a bad roll.