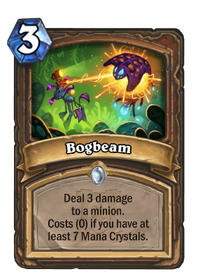 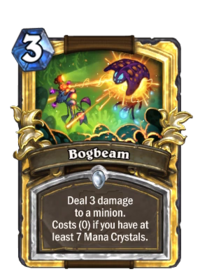 Deal 3 damage to a minion.
Costs (0) if you have at least 7 Mana Crystals.

Some think the mysterious bright lights in the bog are alien invaders, others think they're just swamp gas. Turns out, it's just druids.

Bogbeam is a common druid spell card, from the Ashes of Outland set.

Bogbeam can be obtained through Ashes of Outland card packs, through crafting, or as an Arena reward.

Bogbeam is most useful in decks that generate Mana Crystals quickly. While inefficient in the early game, it becomes a useful removal option once its condition is met, and you can even play it in the same turn you ramp up to seven Mana Crystals using Overgrowth or Wild Growth. This card has featured most prominently in combo decks that make use of its 0 cost, especially those that use Gadgetzan Auctioneer, Kael'thas Sunstrider, and/or Exotic Mountseller.