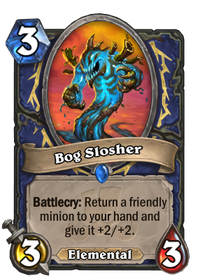 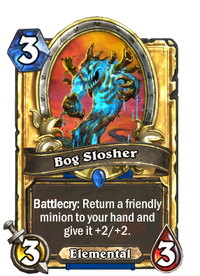 Battlecry: Return a friendly minion to your hand and give it +2/+2.
Flavor text

It's the bane of freshly mopped floors everywhere.

Bog Slosher is a rare shaman minion card, from the Rastakhan's Rumble set.

Bog Slosher can be obtained through Rastakhan's Rumble card packs, or through crafting.

Bog Slosher lets you return a minion to your hand mainly to reuse their Battlecry, like Youthful Brewmaster. While moving the minion out of the battlefield usually results in a loss of tempo, the +2/+2 it gives compensates for it later. It's best used in cheap minions for both ease of re-use and relatively high stat increase for its stat baseline. It's particularly useful for Battlecry synergy decks, as well as Elemental decks, being an Elemental itself and the fact that many Elemental synergy effects are part of Battlecry effects.