This article is using {{Card template}}.
See Help:Style guide/Card for how to edit this kind of article.
Edit this article
Blubber Baron
40294 • CFM_064
Regular 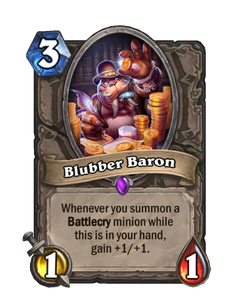 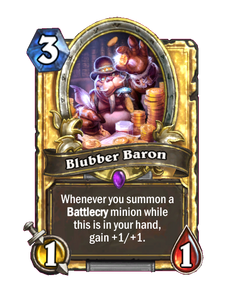 Dimensions: Full • 330 x 410px
Whenever you summon a Battlecry minion while this is in your hand, gain +1/+1.
Flavor text

When oil, railroad, steel, robber, and red are all already taken, your options are limited. 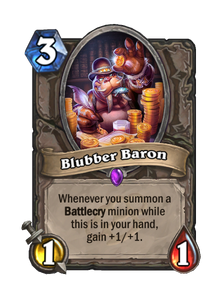 Blubber Baron is an epic neutral minion card, from the Mean Streets of Gadgetzan set.

This minion largely shares the same strengths and weaknesses as Bolvar Fordragon. If drawn early, it can snowball into a huge minion later in the game. If drawn late, it's a useless minion that can kill your tempo. It's also just as vulnerable to Silence effects.

This minion is well suited for inclusion in Grimy Goons-themed hunter, paladin and warrior decks, as he can either get double benefits from any Battlecry that buffs minions in the player's hand, or get buffed even when the Battlecry hits another minion in the hand. Because its effect triggers from summoning Battlecry minions, it gets buffed multiple times with Doppelgangster and Saronite Chain Gang, which are common inclusions in those deck.

Summon
One for the boss, two for me. *chuckles*