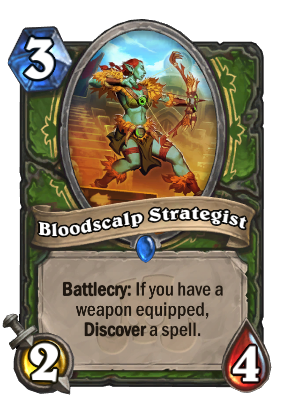 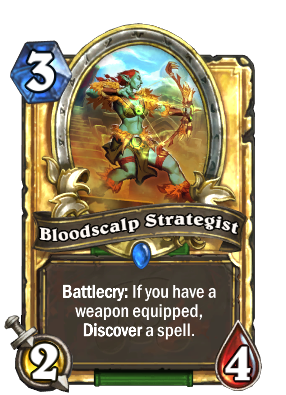 Battlecry: If you have a weapon equipped, Discover a spell.
Flavor text

“Shoot them in the face” is more of a tactic than a strategy.

Bloodscalp Strategist is a rare hunter minion card, from the Rastakhan's Rumble set.

Bloodscalp Strategist can be obtained through Rastakhan's Rumble card packs, or through crafting.

Bloodscalp Strategist allows you to choose the right spell based on your current situation. It also lets you play more than two copies of a powerful spell in the same game, which is difficult for your opponent to play around as well.

Bloodscalp Strategist can also be played on curve with Headhunter's Hatchet.

The Bloodscalp are a tribe (or a clan) of jungle trolls that split off from the Gurubashi Empire after the defeat of Hakkar the Soulflayer. The various tribes claimed territories in the vast jungles of Stranglethorn Vale but quickly began fighting one another.

The Bloodscalp tribe has since settled in the northwest of Stranglethorn and to this day the Bloodscalp fight off all interlopers, including the nearby Skullsplitter tribe, in order to hold onto the land they have taken. Bloodscalps have nothing but contempt for the Darkspear tribe, which is the only tribe of jungle trolls to have joined the Horde.