This article is using {{Card template}}.
See Help:Style guide/Card for how to edit this kind of article.
Edit this article
Bloodsail Raider
999 • NEW1_018
Regular 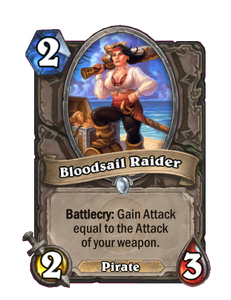 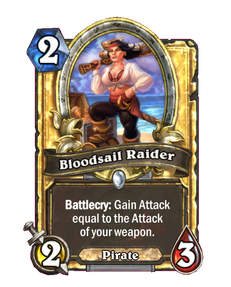 Bloodsail Raider is a common neutral minion card, inducted into the Legacy set, formerly from the Classic set. 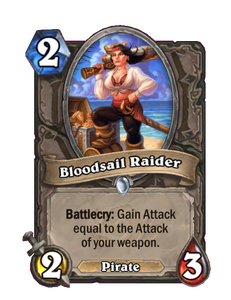 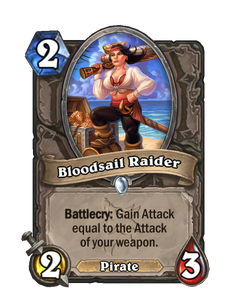 Two copies of regular Bloodsail Raider (Core) are obtained for raising sum of all your class levels to 1.

Two copies of golden Bloodsail Raider (Core) are obtained for winning 500 games across all classes.

Bloodsail Raider (Core) is uncraftable and cannot be crafted or disenchanted.

Bloodsail Raider's Battlecry makes her an effective card for any deck that has a lot of weapons.

A rogue deck is particularly good due to their hero power, which essentially makes her a cheap 3/3 minion. Deadly Poison, Perdition's Blade and Assassin's Blade can help make the Bloodsail Raider a threat even when played later.

Warriors will also find the Bloodsail Raider a very good choice. Their variety of high-damage weapons, such as Fiery War Axe, Arcanite Reaper and Gorehowl add a lot of Attack.

Bloodsail Raider is also a Pirate, which means she can benefit from Southsea Captain and Captain's Parrot.

During the events leading up to and following the Third War, several criminal organizations appeared around Azeroth. The neutral evil Bloodsail Buccaneers appear to be one of these organizations, originating from Bloodsail Hold on Plunder Isle, which is where their ruler, Duke Falrevere, holds court. They now plot to plunder and cripple the Steamwheedle Cartel-controlled port city of Booty Bay, currently under the protection of the Blackwater Raiders. It is likely the Bloodsail Buccaneers have come to take advantage of the city’s current loss of its fleet off the coast of the Arathi Highlands, in which two of its ships were destroyed and the remaining ship forced to find shelter in a cove where its crew currently fights to survive skirmishes against the Daggerspine naga.

Both the Bloodsail Buccaneers and Blackwater Raiders seek to achieve their goals without having their forces engaged in battle; to this end each side now seeks the aid of adventurers sympathetic to its cause.