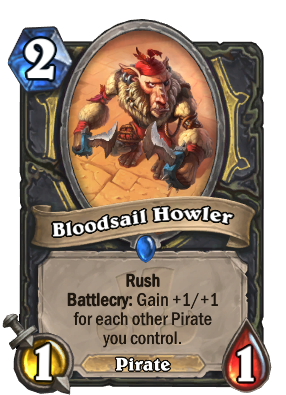 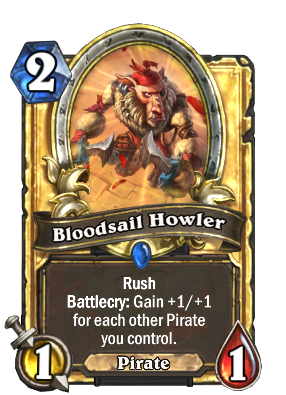 Rush. Battlecry: Gain +1/+1 for each other Pirate you control.
Flavor text

They saw their fate a closin'
Aboard a pirate ship
On deck: The Howlin' Hozen
About to let one rip.

Bloodsail Howler is a rare rogue minion card, from the Rastakhan's Rumble set.

Bloodsail Howler can be obtained through Rastakhan's Rumble card packs, or through crafting.

This card is similar in effect and stats to Biteweed from Journey to Un'Goro, but with rush and the restriction of needing the buff-cards to be pirates. Although Pirate Rogue decks may have appreciated this card in previous expansions, the rogue legendaries in Rastakhan's Rumble and this card are uncooperative.

Gral, the Shark needs to eat larger minions in order to be worth it's 5-mana cost. Captain Hooktusk's battlecry could recruit Bloodsail Howler, who already has rush, is at a 1-1 without it's own battlecry, and takes the place of other, more useful pirates like Southsea Captain and Ticket Scalper. The only time this minion would truly shine is if you used Captain Hooktust, then summoned Bloodsail Howler from your hand, but this is typically unreliable. Overall, this is a very weak minion that should not be considered.

Although extremely dangerous, they are the least wealthy of all pirate groups. This is due to the simple fact that no one survives a Bloodsail attack, which means the pirates don't allow survivors to be possibly robbed again in the future.

Bloodsail Howler represents a hozen member of the Buccaneers. While hozen pirates are not an uncommon sight in World of Warcraft, hozen members of the Bloodsail Buccaneers specifically are unique to Hearthstone.

The words "dooker" and "wikket" are common elements of the hozen language. While they appear to have multiple possible meanings, they are usually used as insults, with "wikket" specifically referring to any non-hozen humanoid race.